Robert Drago
Share This
Add your voice to the comments

by Robert Drago and Jeffrey Hayes

“To excite voters, and especially women voters, political parties can address the pressing need for policies to improve work-life flexibility and balance, as well as to provide basic protections, such as paid sick days, to help workers care for their families,” said Barbara Gault, IWPR Executive Director.

For example, likely voters overwhelmingly support paid leave for family care and child birth, quality and affordable child care, paid sick days, a right to request a flexible schedule, a right to refuse overtime, and a higher minimum wage. Across the board, women support such work-life policies more than men, as do parents with children under the age of 18 value such work-life policies more than those without children under the age of 18.

Similar patterns are seen in support for laws to improve the quality and affordability of child care and after-school care. Three-quarters of voters agree with these policies – 79 percent of women and 75 percent of men. African Americans (88 percent) and Hispanics (84 percent) are more likely than Whites (73 percent) to factor child care arrangements into their electoral choices. Eighty-nine percent of Democrats, 63 percent of Republicans, and 71 percent of Independent voters see a role for government in promoting high quality, affordable child care.

Paid sick days legislation, which would require businesses to provide leave when workers or their children are ill, has been introduced each year since 2005 in both the Senate and the House of Representatives.  More than two-thirds of registered voters (69 percent) endorse laws to provide paid sick days; 74 percent of women and 63 percent of men.  A majority of both Republicans (57 percent) and Independents (59 percent) favor such laws, but even more Democrats (84 percent) support paid sick days laws.

Eighty-two percent of registered voters support legislators who will work for stronger laws to challenge discrimination and unfair treatment on the job—with support at 90 percent among respondents aged 18-39. More women favor such policies (86 percent) than men (77 percent). Levels of agreement are high across groups defined by race and ethnicity, but highest among African Americans (90 percent) and Hispanics (86 percent) compared with Whites (80 percent). Ninety-one percent of registered voters who identify as Democrats compared with 72 percent of Republicans and 81 percent of Independents would endorse a candidate proposing laws to ensure fair workplaces.

Policies to provide workers with the right for a flexible schedule are supported by 64 percent of registered voters. We found work schedule flexibility to be very important to women (70 percent), parents (71 percent), African Americans (79 percent), and Hispanics (69 percent). Democrats are most likely to support such a labor right (77 percent), although over half of Republicans (55 percent) and Independents (58 percent) do so as well.

The Federal minimum wage is currently set at $7.25 per hour so a full-time worker (2,080 hours per year) earns $15,080 at minimum wage. More than two-thirds of all voters (68 percent) think this should be higher. Groups with lower earnings, on average, are more likely to endorse an increase in the minimum wage: women (74 percent), young voters age 18-39 (74 percent), African Americans (89 percent), and Hispanics (81 percent).  Legislation to increase the minimum wage  is supported by 85 percent of Democrats compared to 63 percent of Independents and less than half (48 percent) of Republicans.
Read a previous release on this study on IWPR’s website.

The Institute for Women's Policy Research (IWPR) conducts rigorous research and disseminates its findings to address the needs of women and their families, promote public dialogue, and strengthen communities and societies. IWPR's work is supported by contributions from foundations, individuals, organizations and corporations, and government grants and contracts. IWPR is a 501 (c) (3) tax-exempt organization that also works in affiliation with the women's studies and public policy programs at The George Washington University. 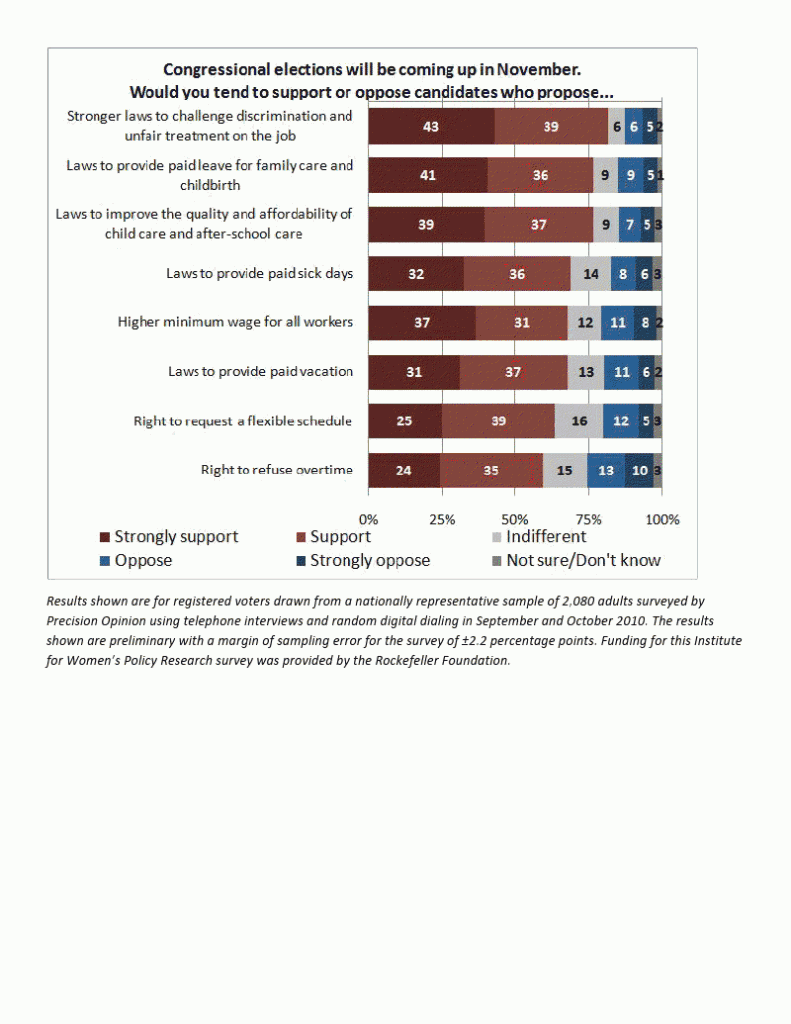 Results shown are for registered voters drawn from a nationally representative sample of 2,080 adults surveyed by Precision Opinion using telephone interviews and random digital dialing in September and October 2010. The results shown are preliminary with a margin of sampling error for the survey of ±2.2 percentage points. Funding for this Institute for Women’s Policy Research survey was provided by the Rockefeller Foundation.

For Mother’s Day, We’re Turning the Tables on Congress with a MOMibuster!

Help us turn the tables on Congress and MOMibuster THEM!