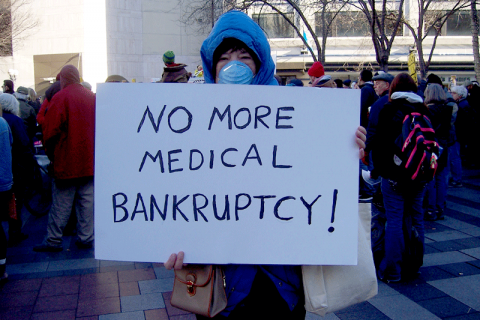 The author at a healthcare rally. 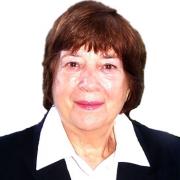 Claire Yurdin
Share This
Add your voice to the comments

My husband’s medical bills forced us into personal bankruptcy in 2009. We had medical insurance through his job with a high-tech contracting agency, but the plan was limited. The first procedure of the five he had in one year for a stubborn heart rhythm condition exceeded the cap. Suddenly, we were deeply in debt in addition to struggling for his life. In a community property state such as ours, one spouse is held responsible for the debts of the other. There was no way out but to declare bankruptcy.

Sadly, we were not alone. A 2009 study found that 62.1% of all bankruptcies were caused by medical bills, knowledge that was cold comfort. I won’t go into the shock, shame, and pain of this experience for me.

My husband was age 64 at that time, one year before he could get Medicare. Until the magic age of 65, he had to buy very expensive medical insurance on the state exchange for high risk patients as no insurance company would accept him, a further drain on our savings.

Chapter 7 bankruptcy leaves you with $21,000 in savings, your 401K, your car, and your house. This massive hit to our finances just before retirement was deadly. I had retired at 62, but had to unretire and work to age 75 before retiring again. Even so, our retirement is lean.

Let me say that no resident of Europe or Canada would be writing this.

Galvanized by this experience, I became politically active. I worked for passage of the ACA, which eliminated caps and denial of insurance for pre-existing conditions. Unfortunately, single-payer was not politically possible at that time.

Perhaps the single greatest prod I provided was to post our story on the CA Nurses Association’s blog. A New York Times reporter picked it up there and wrote a feature on us, "Insured, but Bankrupted by Health Crises," that appeared on the front page of the New York Times on June 30, 2009 as Obama pushed to pass the ACA. The link is still active after all this time;  see https://www.nytimes.com/2009/07/01/business/01meddebt.html.

"But as it turns out, an estimated three-quarters of people who are pushed into personal bankruptcy by medical problems actually had insurance when they got sick or were injured," reporter Reed Abelson wrote. "And so, even as Washington tries to cover the tens of millions of Americans without medical insurance, many health policy experts say simply giving everyone an insurance card will not be enough to fix what is wrong with the system.'

"Too many other people already have coverage so meager that a medical crisis means financial calamity," she continued.

I had thought that Ms. Abelson would include other cases as well, but her article featured our story alone.  The Times article was reprinted by papers around the country. Senator Grassley (R, Iowa) even started a Senate investigation of the limited plans.

The ACA has not improved the situation with medical bankruptcy as it turns out. “A lot of people, a little over 60%, are filing bankruptcy at least in part because of medical bills. Most of them are insured. It’s clear that despite health insurance, there are many, many people incurring costs not being covered by their insurance,” said Dr David Himmelstein, lead author of the study Medical Bankruptcy: Still Common Despite the Affordable Care Act (March 2019.). “Medical debt is incredibly common, it’s the main cause of calls from collection agencies, and the vast majority of people with it have insurance,” he wrote.

“Health insurance that we have today is a defective product,” he concluded. See https://www.theguardian.com/us-news/2019/nov/14/health-insurance-medical-bankruptcy-debt.

The Trump administration has worked ceaselessly to weaken and repeal the ACA, which is far from good insurance as we can see. They have tried to bring back capped insurance again and have proposed the old high-risk-patient state exchanges as a solution. NO NO NO.

With so many losing their jobs and health insurance due to the COVID-19 pandemic, now finally seems to be the perfect time for the US to join the other advanced countries of the world and provide inclusive single-payer health insurance for all. We can make something positive come from this pandemic. It is long overdue.

This, of course, means that we need to elect Biden as President and a Democratic Senate majority. We need to work hard on this and take nothing for granted.

It is unacceptable that the richest country in the world does not provide comprehensive  medical care for all and that a serious illness can force a family into bankruptcy.