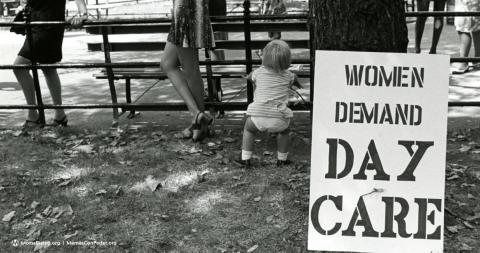 Did you know that we could have had a fair and just universal child care system 50 years ago? That’s right (and infuriating!). It was 50 years ago today when Republican President Richard Nixon vetoed the Comprehensive Child Development Act, a bill that would have implemented a multibillion-dollar national child care system. This veto ended the last major Congressional push for child care.

But NOW we finally have a chance to right historical wrongs! Tell Congress to make comprehensive, affordable, high-quality child care and Pre-K system for families a reality by passing the Build Back Better Plan!

But after decades of struggling to find care, the passage of the Build Back Better package will make a critical difference for our families by ensuring:

The Build Back Better plan doesn’t just increase access and supply, it also offers a guarantee of child care assistance to 93 percent of working families over time. And across all states, the law would subsidize child care for more than 13 million children younger than age 6.[1]

Congress must ensure our grandchildren aren’t having to fight the same fight as the generations that came before by passing the Build Back Better package before the year ends. SIGN NOW to say 50 years without child care is ENOUGH!

As noted recently by Fatima Graves from the National Women’s Law Center, in 1971, leaders like Dorothy Bolden, Shirley Chisholm, Marian Wright Edelman, and Evelyn Moore led campaigns that brought about the Comprehensive Child Development Act of 1971, promoting child care workers as "middle-class experts" deserving of fair wages for the service they provide working families. Buoyed by support from labor unions, it passed both houses of Congress with bipartisan majorities.[2]

The structure of the child care system in this bill would have put control of publicly-funded child care centers in local hands which, in much of the South, meant challenging white state governments in favor of local control by Black communities and leaders. As a means to keep their hold on segregation, conservative activists lobbied heavily against the bill, and based on this the then President Nixon issued his veto 50 years ago today, ending the last major Congressional push for a fair and just universal child care system.[3]

It’s been 5 decades since then and TODAY we finally have the chance to ensure that history stops repeating itself and that we FINALLY have the child care investments our families have needed for generations! Tell Congress that they must act NOW for our families and for the future of our nation by passing the Build Back Better Plan ASAP!

Nixon’s veto and our government’s limited bandaid solutions over the decades since then have cost our economy billions of dollars every year since,[4] and pushed moms and caregivers out of much-needed jobs due to unaffordable or inaccessible childcare, all while denying generations of parents a fair shot and peace of mind. And the devaluing of child care itself is rooted in the lack of value our society places on Black, brown, and immigrant women.[5]

Congress must end the longstanding American tradition of taking the work of Black and brown women for granted. This 50 year anniversary needs to become a relic of the past as we collectively move towards a future where our families, children, and country thrive.