Learning to Love What You Have

In a season focused on gratitude, 17-year-old Monica Chica has an attitude about choosing to be grateful that’s wise far beyond her years: “The most important lesson I learned is that being happy is not about having with you what you loved in the past, but learning to love what you have in the present.”

Monica learned this lesson the hard way. She grew up in El Salvador where her father was a lawyer and teacher and her mother was a doctor. Monica’s mother suffered from Guillain-Barré Syndrome, a nervous system disorder which caused her a lot of weakness and pain. The disease often left her bedridden and kept her from playing an active role in the family’s daily routines. Monica was grateful to have her at home and had lots of other support. The school just across the street from her house where she was a star student, the beloved church where she started teaching Sunday school at age 9, and her best friend’s house a block away were the center of Monica’s childhood. As pervasive gang violence began striking closer and closer to home, when Monica was 15 her family decided to leave everything behind to try to start a better life in the United States.

Watch Monica's story, in her own words 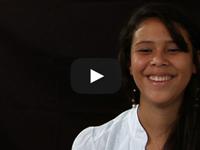 Almost immediately, the American Dream wasn’t what they’d expected. Monica, her parents, and her older brother and sister moved in with an aunt and other family members in Montgomery County, Maryland. Monica—who only knew a few words in English—was enrolled in a large high school where even other Hispanic students teased her about her accent. For the first six months she avoided speaking in school at all. Her aunt had worked for years to secure legal residency for Monica’s family. But her father discovered that being a lawyer and a teacher in El Salvador did not translate into a good job here. It took more than a year for him to find a job as a janitor. Her mother’s health took another turn for the worse and there wasn’t enough money for the health care or medicine she needed. Before long her parents decided to separate and her mother and brother returned to El Salvador leaving Monica hopeless: “Everything that I had left was my family and now it was destroyed. In less than one year my life had turned meaningless and worthless for me.”

In an unexpected twist a sport Monica had never played before was about to help turn her new world around. Monica is 6’3”, and word traveled to the girls’ basketball coach about the new student in school. “I was in my ESL [English as a Second Language] class, and the coach got close to me, and I was like, ‘Why is a tall woman talking to me? I don’t understand anything of what she’s saying.’ . . . I just told her that I didn’t speak English [and] that I had never played basketball before. And she said, ‘I don’t mind. I’m going to teach you. If you want to, you can try.’” Somehow, Monica agreed. “At the beginning it was hard because I didn’t know what side of the court I was supposed to run—I just knew that I had to throw the ball to the basket. That was it. I didn’t know the rules. I didn’t know why the referee was whistling. I didn’t know anything. But I went to practices. I started playing. I started practicing [on] my own because I really liked it . . . I don’t know how, but I did it, and that gave me more confidence in myself.”

Being part of the team also gave her a new set of friends and a lot more practice learning to speak to and understand her teammates, and her growing confidence on the basketball court translated to more confidence in the classroom. As her English improved she was moved out of her ESL classes into regular ones and then from regular classes into honors courses. Today, less than two years after beginning school in Maryland, she has taken Advanced Placement and International Baccalaureate courses and has a 4.0 grade point average. She’s also a starter on the varsity basketball team. She was recently honored with one of the Children’s Defense Fund’s Beat the Odds® Awards for how much she has overcome.

Monica is giving back to others. Her favorite service activity is directing the children’s ministry at her church and she’s helped other young immigrants, including some of the children who arrived fleeing violence in Central America this past summer. “I feel thankful to God to have my residency and everything, but I also try to help people, because I think being in English as a Second Language helped me understand and meet people that were going through and struggling with the same things I was . . . I might not understand the whole thing about being an immigrant, but I understand part of it, which is getting used to a new country, a new language, new friends. So every time I see people that are coming, I try to help them. I try to encourage them not to drop out of school, to keep going, to continue studying, to do their best.”

Despite all her challenges, Monica sees a happy future for herself and shares more about what she’s learned about thankfulness: “Maybe my family is not going to be back together again, or my life is not going to be the same again, but if I only thought about that I would be grumpy the whole time . . . I have to learn how to love what I have right now, and the blessings I have right now. . . It’s important to know how to love, because if you don’t love, you’re not happy.”