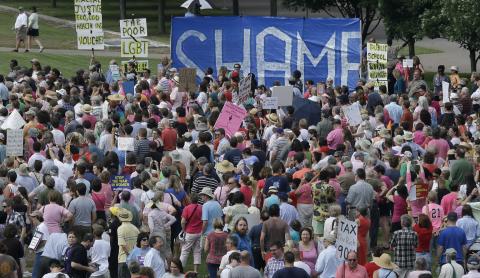 As a lifelong North Carolinian, I really appreciated this data-based analysis from Tom Jensen of Public Policy Polling on how the Governor lost his re-election effort (the first to do so in NC history). First, polls show that Governor Pat McCrory's policies were widely unpopular, and that was before the anti-transgender and anti-worker HB2 bill was rushed through the legislature and signed by the governor all in one day. NC became a national laughingstock, but that alone did not turn the election.

Starting back in 2013 when the NC legislature started pushing through policies that hurt women, kids, the elderly and sick, low wage workers, and the environment, North Carolinians coalesced into a massive protest movement. With roots in the state NAACP's annual marches that brought together a diverse coalition of organizations including MomsRising, the Moral Mondays protest movement was a way for people all around the state to show that they were not going along with this anti-people agenda.

Pushing back hard on McCrory worked. The seeds of his final defeat today were very much planted in the summer of 2013. And it’s a lesson for progressives in dealing with Trump. Push back hard from day one. Be visible. Capture the public’s attention, no matter what you have to do to do it. Don’t count on the media to do it itself because the media will let you down. The protesters in North Carolina, by making news in their own right week after week after week, forced sustained coverage of what was going on in Raleigh. And even though it was certainly a long game, with plenty more frustration in between, those efforts led to change at the polls 42 months after they really started.

Read more at Why Pat McCrory Lost and What It Means in Trump’s America – Public Policy Polling.