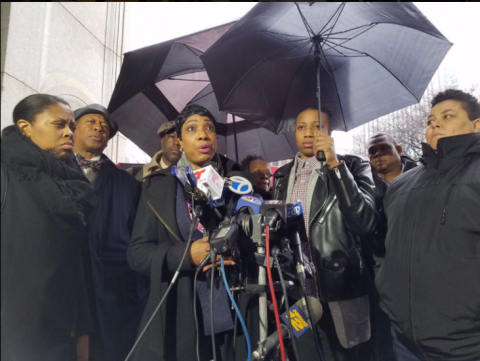 Constance Malcalm, mother of Ramarley Graham, speaks to supporters at the first day of trial of Officer Haste

S. Nadia Hussain
Share This
Add your voice to the comments
“True peace is not merely the absence of tension: it is the presence of justice.”
-Dr. Martin Luther King Junior
On Martin Luther King Day this past Monday, people around the country paid tribute to the legacy of a now celebrated leader who fought vehemently for equality, accountability and the dignity of black people. This day also highlighted the work still needed to be done as black men, women and children continue to lose their lives at the hands of the those who should be protecting them. Monday was Martin Luther King day, Tuesday was the start of an administrative trial for NYPD Officer Richard Haste, who shot and killed an innocent black young man 5 years ago, a shooting that to this day has not been brought to justice.
18 year old Ramarley Graham was shot by NYPD police officer Richard Haste on Feb 2, 2012. NYPD officers alleged that Ramarley was adjusting his trousers and suspecting that he had a gun, followed him into his home before kicking down his door and fatally shooting him in front of his grandmother and six year old brother. They entered without a warrant and no gun was found at the scene.
In addition to this, there have been been troubling inconsistencies in NYPD police reports, such as police reporting that Ramarley ran away from the police while a video recording clearly showed that he walked into his home, unaware that he was being followed. NYPD spokesman Paul Brown initially stated that there was a struggle between Ramarley and police officers but the next day NYPD Commissioner Ray Kelly said that there was no struggle.
Despite the mounting evidence of police brutality and excessive use of force leading to death, justice has not been served. Officer Haste was charged with manslaughter a few months after Ramarley’s death, but his indictment was later vacated by a judge. Ramarley’s family eventually won a lawsuit against the city, yet there has still been no indictment or charge for Officer Haste, nor any of the other police involved in the shooting.
Five years later, Ramarley’s mother, Constance Malcolm, has not let up her call for justice for the killing of her son. “The settlement is no justice. Money can’t bring my son back. And the lifetime of pain that this city has caused me, there’s no money that can fix that. I will always continue to fight no matter what the outcome is, because I’m still fighting for these cops to be fired. Even after that I will still continue to fight.”
The trial this week presents another chance to make Officer Haste take responsibility for his deadly actions. Communities United for Police Reform organized supporters to court this week in his  NYPD administrative trial. They are packing the court to stand with Ramarley’s family and demand NYPD fire Haste and the 12+ other officers involved.
Every day this week at 10am, supporters of Ramarley and his family packed the courthouse at NYPD headquarters demanding justice and accountability. MomRising’s VP and Chief Partnership & Diversity Officer, Monifa Bandele, attended in solidarity on Monday and today. Tomorrow, Friday Jan 20th, will be the last day of the hearing.
If you are interested in supporting Ramarley’s family and joining the call for justice, go to http://www.riseup4ramarley.org/. If you are in the NYC area and want to attend the last court date tomorrow, or any additional court dates that may be added next week go to Pack the Court for Ramarley Graham. Even if you can’t attend, you can tweet, you can FB and share Ramarley’s story.
Nicholas Heyward Jr., Malcolm Ferguson, Patrick Moses Dorismond, Ousmane Zongo, Tamon Robinson, Kimani Gray, Sean Bell, Amadiou Diallo, Eric Garner, Akai Gurley and Ramarley Graham are some of the names we know of unarmed black men in New York City who have been killed by the NYPD. How many lives need to be sacrificed until there is accountability? How many mothers must mourn as those who killed their loved one face no penalty or jail time, in many cases receiving promotions, raises and awards?
No mother should lose their child to police violence. They shouldn’t fear that their sons and daughters will be shot by those sworn to protect them. Let us stand so that the presence of justice can make itself known, for Ramarley Graham and for the black men and women who have lost and continue to lose  their lives to police violence and systemic oppression.