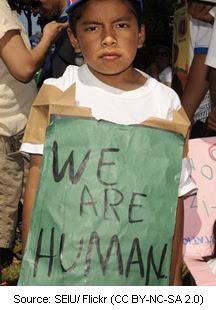 [IMAGE DESCRIPTION: Child with shoulder length black hair looks at the camera and holds a green sign that says "We Are Human."]

Join Us to Say NO to Trump Calling Undocumented Immigrants "animals"

Donald Trump just said that undocumented immigrants “aren't people,” that they are “animals."

We didn't think it was possible, but things have just taken a turn for the worse. Enough is enough. This isn't just offensive. History shows this particular dehumanizing language can lead to genocide. Immigrants with and without papers are part of our communities, families, lives, and country. Trump’s words and immigration policies are beyond NOT okay.

*Tell Congress it’s NOT okay to call anyone an “animal” as President Trump just did -- and urge them to stop his destructive and unconscionable immigration policies, like purposefully separating moms and babies.

It’s time for each and every one of us to call on Congress to finally step up and halt our country’s slide down Trump’s destructive path, where now entire communities are being dehumanized.

Language matters, language is powerful, and historically this exact kind of language has lead to cruelty, violence and death too many times.

*Tell your member of Congress now that it’s NOT okay to call anyone an “animal,” and to finally draw the line and put a stop to destructive and unconscionable immigration policies like purposefully tearing babies out of the arms of their mothers.

Since October, more than 700 children have been taken from parents arriving at our borders, including more than 100 children under the age of four. Further, ICE has “lost track of” nearly 1500 children who were separated from their parents and who are now at risk for human trafficking.

Destructive family separation is happening in our communities across our nation. Under President Trump, ICE agents are moving aggressively against community leaders, our colleagues, our family members, our sports teammates, with many children left stranded without one and sometimes both of their parents.

Family separation is cruel and inhumane. Full stop. People are being dragged away from their loved ones.

Yet, Donald Trump has indicated that worse could be yet to come. For mothers, there’s only one nightmare that tops being separated from our children, and that’s being terrified that they and other loved ones could be treated like animals to be hunted down and worse.

Donald Trump just said that undocumented immigrants “aren't people,” that they are “animals." Congress must finally halt our country’s slide down Trump’s destructive path, starting with putting a stop to unconscionable immigration policies like purposefully separating young children from their parents.

Please share this post with your family, friends and anyone else you know who is worried about the destructive path Donald Trump is pulling our country down.

Together, we will defend our country’s humanity and values. Thank you for standing with us at this critical moment in our nation’s history.