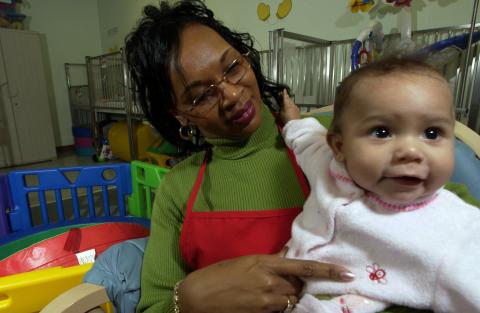 Invest in Women to Reduce Poverty

This post, authored by Jennifer Lockwood-Shabat, originally appeared on TalkPoverty.org.  Jennifer Lockwood-Shabat discusses the results of a study published by the Women's Foundation and the policy solutions that can lift all women out of poverty. She urges lawmakers to expand their investment in women and their families. TalkPoverty.org is dedicated to demonstrating that we know how to dramatically reduce poverty; we just need to build the political will. Make sure to like TalkPoverty on Facebook and follow us on Twitter!

Women’s History Month is a time when we celebrate the incredible strides of women and girls in our country. But even as we continue to talk about shattering the glass ceiling and breaking down barriers, far too many women have their dreams of college and a successful life dashed by economic adversity.

To examine these struggles, The Women’s Foundation published Poverty Among Women and Girls in the Washington Region late last month. We found that well over 450,000 women and girls live near poverty or below twice the poverty line. Moreover, the cost of living in the Washington region makes it nearly impossible for these families to make ends meet without assistance. For instance, a family of three (one adult and two children) that lives at twice the poverty line earns only $39,060 per year; but in order to meet basic needs, a family of three living in the District of Columbia requires an annual income of more than $85,000.

We also found that there are strong economic disparities based on race, ethnicity, and gender. Across the Washington region, women have higher poverty rates than men. Among adults in the region, Black and Latina women face the highest rates of poverty at 15.6 and 14.2 percent, respectively.

Low levels of educational attainment and poverty are also strongly correlated. In the Washington region, women with less than a high school diploma are six times more likely to be poor compared to women with a bachelor’s degree. Indeed, education remains one of the surest pathways to building a foundation for economic security, but low-income women often experience barriers to access. That’s why proposals such as President Obama’s America’s College Promise which would provide free community college have sparked so much interest from organizations working to end poverty. But in addition to meeting the high costs of post-secondary education, women may also require transportation supports or dependable, quality child care in order to attend classes.

The challenges don’t end there. Once a woman achieves the qualifications and credentials she seeks, she may not earn the pay equivalent of her male counterparts. These factors are compounded when women serve as the sole head of their household, which is the case for more than 60 percent of families in poverty in the Washington region. When child care costs in the District of Columbia are 90 percent of earnings for low-income women, not only are families unable to advance out of poverty, they struggle simply to make ends meet on a daily basis.

Unfortunately, what we see happening in communities across the Washington region is also a national trend. But there are some key steps we can take to help women on the path to economic security, including: adopting critical policies and supports like quality, affordable early care and education; strengthening available safety net programs, and encouraging jobs with family-sustaining wages and benefits. We must also raise awareness about the needs and vulnerabilities of women with the recognition that their economic security isn’t just a “women’s issue.”

Women’s philanthropy has played a critical role in pushing for policy reform; investing in direct service programs to help women access job training, quality early care and education, along with financial literacy and asset building skills; and raising awareness across the country (and the world) for more than 40 years.  Its impact is growing every day. Recognizing that gender matters, we invest in women, and in doing so we impact entire families and whole communities for the better.

You can read the Poverty Issue Brief and get involved here.