I'm feeling "all the feelings" about my daughter's 2nd birthday

Today is my daughter Beatrix’s 2nd birthday and that has me feeling “all the feelings” because Bea’s birth and my dad’s death are so inextricably linked that it is impossible for me to think of one without the other. 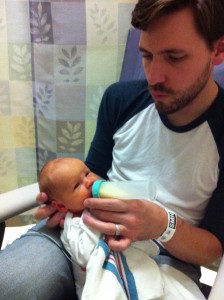 My husband, Matt, feeding Bea in the NICU.

My husband and I told my parents I was three months pregnant with baby # 2 the same week a doctor told my dad, that, because of his cancer, he had three months left to live.  I remember thinking my news had to cancel out his, because that is just the kind of dad he was: Always, always there for us. No way would he miss this baby’s birth. Inconceivable. The doctor was wrong: Dad died about 6 weeks later.  Two days after Dad’s funeral, at my 20-week checkup, I was diagnosed with placenta previa that, over time, turned into placenta accreta (a severe complication that puts women at risk of pre-term delivery and hemorrhage).

I feel like that bears repeating: Two days after saying goodbye to my dad, I learned I had a potentially life-threatening pregnancy complication.

Fast-forward a few months. Three weeks before Bea was due (one week after what would have been Dad’s birthday) I started bleeding and had to rush to the hospital. (Side note: We had just finished giving our two year old a bath. We rushed around throwing together toys and snacks, not knowing how long we'd be there, and it was only once we got to the hospital that we realized we'd left the diaper bag at home. Whoops! We had an iPad, but no diapers.)

The accreta increased the likelihood I’d have to have an emergency hysterectomy so the docs had to knock me out completely before operating. Because of the fear that the anesthesia would hurt Bea while she was still in-utero, they waited until the last possible moment to put me under. That meant that I was wheeled into the OR fully awake and aware of everything going on around me. I was sitting on the table watching the nurses and docs prep for surgery and bawling my eyes out (big thanks to Rose, the lovely wonderful nurse who held me through all of it).

It worked. Childish or not, thinking Dad would somehow make sure that both Bea and I would survive, helped.

We did. Bea got hit with a heavy does of anesthesia before she was born and wasn’t breathing when she was delivered. She had to be resuscitated in the OR. She spent a week in the NICU. She was in the NICU and I was in post op recovery, so the first time I saw my baby was via a picture of her my husband had taken on his phone. Post surgery, I couldn't move or sit up, and because of all the machines Bea was hooked up too, I couldn't hold Bea till almost 24 hours after she was born. That might have been the hardest part.  Now, though, she’s so big and strong you’d never guess she had such a rocky entry into the world.  I had an emergency hysterectomy, but I’m making my peace with that. 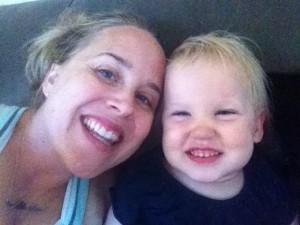 Bea and I ham it up, just a few days before she turns two.

So Bea’s birthday: All the feelings, but mostly grateful. Grateful for good medical care and insurance (and for knowing that neither Beatrix nor I will be denied health insurance in the future for preexisting conditions) and for the ability to take paid family leave. And, of course, I’m grateful for the power of parental love.

Happy birthday, Sweet Bea. And, Dad, thanks for always having my back.