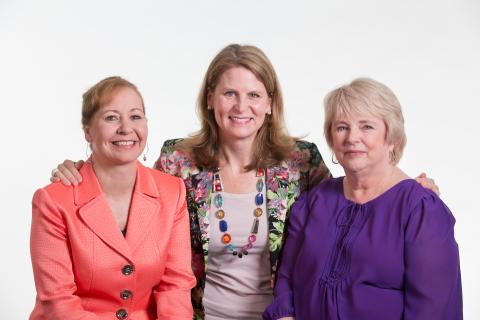 With my Koch Sisters, Karen (l) and Joyce

You’ve heard of the Koch Brothers, the ultra-rich, corporate extremists whose deep pockets are flooding election-season airwaves. Too often, their goals are part of a political playbook to drive down wages, cut Social Security and Medicare and secure more corporate tax breaks at the expense of our environment. Their money may dominate American politics and law-making, but their values and ideals sure don’t.

We have a better alternative. Meet The Koch Sisters, Karen and Joyce, who share the same last name but not the same values as the infamous Koch Brothers. They’re not related to David and Charles Koch, or to each other. But they’re sisters where it counts–in spirit, in solidarity and in their shared values. The Koch Sisters are bringing to the forefront of political debate the issues most Americans care about–from fair wages to protecting Social Security.

They’ll tell you themselves in this video.

Karen Koch is a teacher and mother of two. As a college business professor at Mott Community College in Michigan, she has spent her career preparing students for internships and their first jobs. She is also a member of the Michigan Education Association and comes from a United Automobile Workers family. Joyce Koch, also a mother of two, is a grandmother and is married to a retired American Federation of Teachers teacher. She spent most of her career as a social worker and an administrator for an anti-poverty organization in New York.

Like so many of us, Karen and Joyce have worked hard all of their lives and want to ensure their children and grandchildren have the same opportunities they did. They share the belief that the working families of this country should have every opportunity to get ahead. Unlike the Koch Brothers, the Koch Sisters don’t have billions of dollars and they certainly aren’t trying to buy our democracy. But they care about our country, and what money in politics is doing to it. And they believe their voice, and the voices of millions more people like them—like you and me—are as important as the special interests who use their vast wealth to influence politics and policy.

Perhaps the Koch Sisters are so very different from the Koch Brothers because for Karen and Joyce it’s about people, not profits.

The Koch Sisters stand for the right things that matter most at the right time. I admire Joyce and Karen’s courage for making their voices heard in AFL-CIO television and online ads to get the word out. In fact, I’m a Koch Sister, too! Let’s all join them and become a nation of Koch Sisters! Sign up today at kochsisters.org.