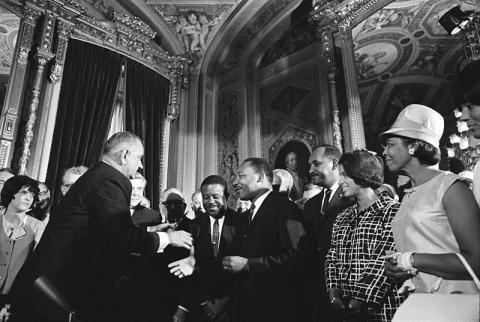 This post, authored by Tracy Sturdivant, originally appeared on TalkPoverty.org. Voter-id laws systematically undermine constitutional rights of women of color. TalkPoverty.org is dedicated to demonstrating that we know how to dramatically reduce poverty; we just need to build the political will. Make sure to like TalkPoverty on Facebook and follow us on Twitter!

Headlines are telling a bleak story this election season, particularly for women of color.

Fast food and home care workers—the vast majority of them minority women who are living in poverty—have been striking for a living wage. Middle class and low-income families across the country are struggling to make ends meet. And while they are busy fighting to provide for their families and earn a living, their constitutional right to vote—to participate in democracy, to voice their opinions on the policies that shape this country—is under attack.

On a recent press call to discuss grassroots efforts to engage voters in Minnesota, Alice Flowers, a grandmother, spoke of her own experiences with economic insecurity.  But the point she made that really stuck with me was about the threat she feels to her voting rights.

“I can’t help but think we’re having to fight the same battles my parents fought in segregated Mississippi,” she said. “And that’s just not right.”

Under some states’ new restrictive voter ID laws, individuals must have a state-issued photo ID that matches the name on their voter registration cards. For women in the low-wage workforce—approximately two-thirds of whom are women of color—the time and cost of acquiring a photo ID are real barriers.

Imagine you live in Texas, several hours away from the nearest DMV. You’re a working mother with a chaotic shift schedule, trying to pay bills and care for your family. Maybe you were married and hyphenated your name, and now your photo ID and voter registration card don’t match. Maybe you never even had a state-issued photo ID to begin with. In these kinds of instances, the new laws will prevent you from voting, even if you were a registered voter in the past.  Under the guise of protecting our democratic process, these laws succeed only in disenfranchising low-income women of color and others, and threatening our democratic process.

Women are consistently overrepresented in the number of people who are affected by these voter restrictions. In North Carolina, for example, women represent 54% of voters in the state, but they comprise 64% of the voters who are unable to vote under the new laws. That’s more than 200,000 disenfranchised women voters, and for women of color the data is even worse. While black women represented less than 24% of all women registered to vote in the state in 2012, they made up more than 34% of the registered women voters who didn’t have the necessary photo ID.

Texas has one of the most restrictive voter ID laws in the nation.  In fact, U.S. District Judge Nelva Gonzales Ramos blocked the state from enforcing it, concluding that Republican lawmakers had intentionally acted to decrease voter turnout of the growing minority population.  Unfortunately, the Supreme Court is allowing the law to be implemented in the upcoming election while it is appealed, and as a result more than 600,000 registered voters might be disenfranchised, including a disproportionate number of minority Texans.

These laws are being pushed at the state level by conservative lawmakers who claim that they are protecting elections from voter fraud, but the voter fraud doesn’t exist. A report by the US Government Accountability Office in September 2014 found that the Department of Justice reported “no apparent cases of in-person voter impersonation charged by DOJ’s Criminal Division or by U.S. Attorney’s offices anywhere in the United States, from 2004 through July 3, 2014.” But there is certainly evidence that voter ID laws keep many women from voting on the issues that matter to them—like increasing the minimum wage, requiring equal pay for equal work, creating paid family and sick leave, and providing affordable child and elder care—and from kicking out the politicians who support these discriminatory laws.

Ultimately, the new voting restrictions need to be struck down by the Supreme Court.  But until then, those of us who can vote, must vote—and must use our vote to ensure that the voices of women of color are heard at the polls.

Tracy Sturdivant is the co-director of Make It Work, a campaign to advance economic security for working women, men, and families.