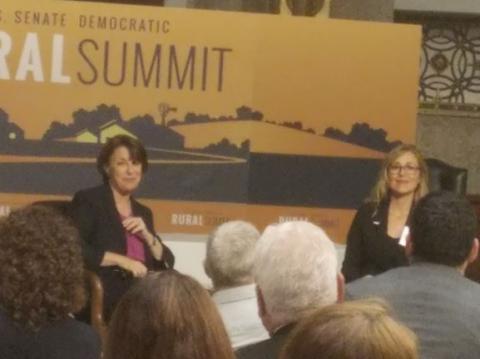 Senators Amy Klobuchar (D-MN) and Jon Tester (D-MT) were interviewing author Sarah Smarsh at a Rural Summit held by Senate Democrats on September 27. Ms. Smarsh was describing the isolation she felt growing up poor in rural Kansas. Her mother was 17 when Sarah was born. There was no Family and Medical Leave Act, no help from the Violence Against Women Act, and long miles to travel to get to medical care. They moved a lot, but there was one “pivotal institution” in her life: public schools. They “saved her,” putting her on a path to a graduate degree and work as an English professor, journalist, and author recently nominated for the National Book Award.

Her new book, Heartland: A Memoir of Working Hard and Being Broke in the Richest Country on Earth, tells her family’s story. Why have voters in places like Kansas turned towards a right wing agenda? she was asked. She disputed that the far right ideology was so widespread, but did observe that the right wing has been more successful in communicating “We get your symbols” – we know what’s important to you. But most, she emphasized, don’t vote at all. They don’t think their votes count.

The Rural Summit raised many issues that Congress should be addressing. Speakers – senators, Governor Ralph Northam of Virginia, farmers, local officials, educators and health care providers – talked about the vital importance of Medicaid expansion through the Affordable Care Act, the need for broadband access to improve everything from health care to education to economic development, and the urgency of helping those with substance use or mental health needs. Some – like Stacy Bohlen, CEO of the National Indian Health Board, talked about the rich human resources in rural communities. Ms. Bohlen talked about the large numbers of working age Native Americans and Alaska Natives, and how they can help solve worker shortfalls in rural areas experiencing population flight. They need education and training so they can fill the open jobs. They, like other rural people, need better access to the internet (68 percent of Native Americans do not have reliable access). Ms. Bohlen’s Native American name is Turtle Woman, which means “speaks truth to the people.” She spoke truth to the Summit’s attendees when she spoke of high levels of food insecurity, and how essential SNAP is. She echoed the crucial role of Medicaid expansion, which she said has reduced the proportion of uninsured Native Americans from 34 percent to 15 percent. We know Medicaid expansion is vital in the efforts to combat substance use disorders. In Indian country, Turtle Woman cited a disastrous 519 percent increase in opioid deaths.

The Rural Summit confirmed the analysis the Coalition on Human Needs' Voices for Human Needs shared just the day before: the drop in uninsured rates for low-income rural residents is three times larger in Medicaid expansion states. Also urgent is the need to address hunger, as Turtle Woman told us. According to Feeding America, 2.4 million rural households face hunger. Three-quarters of the counties with the highest rates of food insecurity are in rural areas; 86% of the counties with the highest rates of child food insecurity are rural. That means SNAP must be protected and improved. The Senate has protected SNAP in the farm bill, but the House has not, and the two bodies are still trying to resolve their differences. (For a first-person description of what’s at stake, read this.)

A lot must come together to address the economic development needs of rural America. The Summit reminded us what is working and must be preserved, and how much more must be done. Pressing for this agenda were the Democratic Senators in attendance: in addition to Senators Klobuchar and Tester, Minority Leader Chuck Schumer (NY), Minority Whip Dick Durbin (IL), and Senators Jeff Merkley (OR), Joe Manchin (WV), Mark Warner and Tim Kaine (VA), Bob Casey (PA), Tina Smith (MN), Jeanne Shaheen (NH) and Heidi Heitkamp (ND).