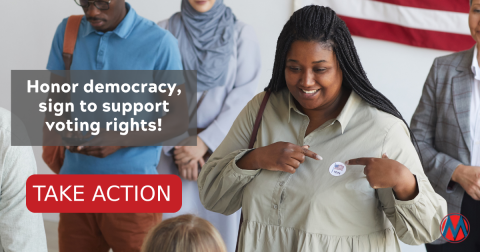 Whatever our background, color, or zip code, in America we value our freedom: the freedom to have a say in our elections, to have our voices heard, and to have our votes counted! Our nation is better and stronger when each and every person is engaged in the future of our country through voting. And right now is a critical time for our democracy.

SIGN ON! Help protect our democracy, tell your members of Congress to protect everyone’s right to vote!

What’s happening? The violent and deadly attack on our Capitol on January 6th, 2021 demonstrated how fragile our democracy is—and how close we were to having the will of the voters overturned. Even after historic voter turnout in the 2020 general election, with nearly two-thirds of eligible voters casting a ballot, there are still those who are working to defy and overrule the will of the people!

Now, as we observe the one year anniversary of one of the most violent attacks on our nation in recent history, it’s clear there is much work to do to make sure that we protect our democracy. Despite a global pandemic during the 2020 election, voters turned out in historic numbers, and part of that is thanks to protocols that made access to the polls safer and easier with options like mail-in voting and drive-thru voting. But some Republican state leaders who are unhappy with the results of the election have been eliminating those options entirely, and working to make voting more difficult overall. Last year alone 19 states enacted 34 laws that will ultimately make voting harder for voters in their states and hundreds more anti-voter laws are being considered.

That’s not OK! These dangerous laws restrict primarily voters of color from having their vote counted, enact extreme partisan gerrymandering, and make it easier for state leaders to remove nonpartisan election administration officials so they can be replaced with partisan allies. That’s dangerous for everyone!

*Sign-on ASAP to help protect our democracy, our right to vote, and to push forward the Freedom to Vote Act and the John Lewis Voting Rights Advancement Act in the U.S. Senate!

This is a turning point for our nation and our Senate leaders must exercise their majority and pass the Freedom to Vote Act and the John Lewis Voting Rights Advancement Act immediately. These bills have the most significant anti-corruption provisions and voting rights protections in generations. They would:

Will you help honor our democracy and protect voting rights nationwide? Don’t forget to add your name!