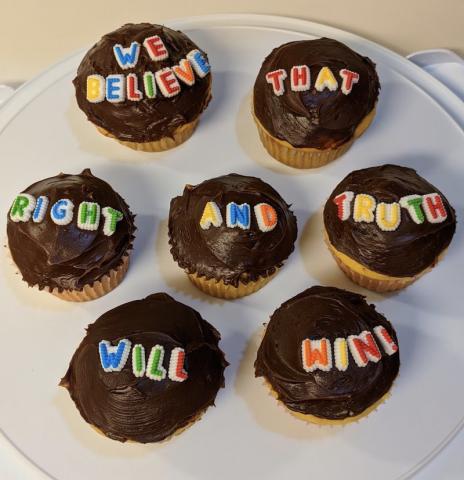 After watching a lie-filled State of the Union address Tuesday night, and then witnessing a slim majority of Republican U.S. Senators voting for a sham acquittal of President Trump last night, I had to channel my anger into action... somehow.

Despite my anger and frustration, I still believe that right and truth will win.

The trial was a sham, but we will not stop fighting for our democracy! Please donate to MomsRising Together to build our power, get out the mom vote, and fight disinformation and voter suppression.

Your donation will be used immediately to organize, to unite our voices, build our influence on Congress and to make our resistance to the lies and corruption as strong as possible. Please support this critical work by pitching in now.

We need your help to add mom-magic to the 2020 elections. Together, we will:

Donate now to help MomsRising challenge the lies and protect our democracy!

The stunning failure of a majority of our senators to protect our country and honor their oath by voting to remove a president for appalling crimes—for which he was deservedly impeached—will ensure that President Trump has no line he will not cross.

The U.S. Senate Republicans made a mockery of justice by refusing to hear from witnesses or consider evidence. Every Senator who refused to hold Trump accountable abdicated their duty, and became complicit in Trump’s shameful and deplorable behavior. This sham trial was an epic failure – a betrayal that will cause profound and lasting harm. Now we have to turn anger into action—Moms have the creativity, will, and expertise to protect our democracy!

Your gift today will help MomsRising be ready for battle to protect our democracy, build our power, get out the mom vote, and fight disinformation and voter suppression.

We are incredibly grateful to the tens of thousands of MomsRising volunteers who wrote, called, and showed up at their members’ of Congress’ offices to speak out to impeach and remove President Trump—Thank you!

We also applaud the U.S. House impeachment managers, who did a masterful job of compiling and presenting overwhelming evidence of President Trump’s guilt; they and House Speaker Nancy Pelosi deserve the thanks of a grateful nation for working so hard to defend our democracy.

However, the notion that President Trump has learned his lesson is absurd. We saw during his State-of-the-Union address, that he has been emboldened. For him now, no lie is too big, no insult too cruel, no hate-mongering too dangerous, no distortion too divisive. This sneak peek at the unchastened Trump was chilling.

We need everyone to turn anger into action, and you can start by donating to supercharge MomsRising Together. Let’s build our power, get out the mom vote, and fight disinformation and voter suppression together!

Together, we’ll never stop fighting to defend the truth and the American values of honesty and decency. We still believe that right and truth will win.

CNN OPINION: Congress is one step closer to fulfilling its promise to women voters