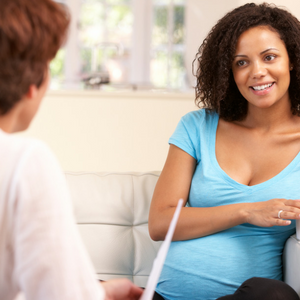 Increasingly, women with cardiac disease are getting pregnant.  We typically associate cardiac disease with people who have had a heart attack or open-heart surgery.  But, as a physician and a cardiac patient myself, I think about the people born with heart abnormalities or those with abnormal heart rhythms that cause interference with day-to-day life. Moreover, I know how difficult it can be to be taken seriously when the symptoms you may feel are vague or poorly defined.  Heart disease is a common killer, but when you’re walking down the street you can’t identify this plagued population.

As a maternal-fetal medicine (MFM) physician, I feel strongly about the pregnant population being carefully screened for cardiac disease.  Women in pregnancy often will have a heart murmur, which can be benign. However, there are some murmurs that are concerning and warrant further workup.  It is important that providers listen to a pregnant woman’s concerns about any shortness of breath or unusual feelings in their chest, as many women who are pregnant have not seen a physician for many years prior to becoming pregnant.

We are seeing more and more pregnant women who were born with an abnormal heart, some of whom have had their abnormality addressed by surgery, but many who have not.  These women carry a risk of experiencing cardiac complications during their pregnancy.  Also, women born with a structural defect in their heart carry a higher rate of having a child with a structural heart abnormality.  This is why MFM physicians recommend that the fetal heart be evaluated in utero to look for any structural abnormalities prior to birth so that we can prepare appropriately.

Pregnancy places a great deal of stress on the mother’s heart, and when risk factors such as hypertension, obesity, and diabetes come into the mix the woman carries a much higher risk of morbidity and mortality.  That is why I take heart health so seriously.

Cardiovascular disease has surpassed the prior leading cause of maternal death, which was hemorrhage. In fact, when cardiovascular conditions and cardiomyopathy (a disease of the heart muscle) were combined, the maternal death rate was more than double the rate of maternal death due to hemorrhage.  For these reasons, I also advocate for state-based Maternal Mortality Review Committees.  These committees look at the records of pregnant women who die during or shortly after pregnancy and try to understand the cause of death.  We can all do our part to eliminate preventable injuries and deaths, especially for pregnant women and new moms.

With February being Black History month, it is important to remember that heart disease disproportionality affects Black women. According to data from the CDC approximately 7.6% of Black women have heart disease compared to 5.8% of White women. Additionally, Black women experience far worse birth outcomes than any other racial group and are three to four times more likely to die during childbirth than their White counterparts.  With heart disease and stroke standing as the most common killer among women, it is important that we work to educate our most at-risk populations.​​​​​​​

Alexandria Hill, MD is a maternal-fetal medicine physician at the High Risk Pregnancy Center in Las Vegas, NV. She is a member of the Society for Maternal-Fetal Medicine, the only national, professional organization specifically devoted to reducing high-risk pregnancy complications.