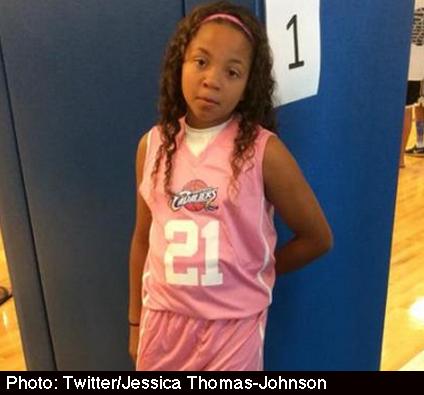 Got All the Way to the Final Tournament--But Disqualified Because a Player's A GIRL?!

The Charlottesville Cavaliers youth basketball team was knocked out of the annual National Travel Basketball Association (NTBA) annual tournament this past weekend in Myrtle Beach, South Carolina, not because they lost, but because one player is a girl.

In previous years, 10-year-old Kymora Johnson had always been allowed to play at the NTBA competition with her mixed-gender team, the Charlottesville Cavaliers. This year, the team was on a five-game winning streak, making it to the final four, when the NTBA decided to invoke its brand-new policy that barred Kymora and her team from playing in the tournament.

Kymora had gone through the entire registration process, but John Whitley, NTBA president, said they hadn’t noticed Kymora as an active participant of the team. “We have no problem with the girls sitting on the bench,” he said. “We don’t care who sits on the bench with the teams, that goes for anybody … to sit on the bench.”

The NTBA’s new rule says girls can play in league games and scrimmages, but not in the national tourney.

It’s 2015. The U.S. Women’s Soccer Team has just won its third World Cup title, Serena Williams has just won her sixth Wimbledon title, and just this week, Katie Ledecky has blown through the women’s 1,500-meter freestyle swimming world record. No sport should deny women and girls the chance to compete.

Sign on now and help us tell the NTBA to retract its new policy banning girls from its national tournament: action.momsrising.org/sign/NTBA_BanOnGirls/