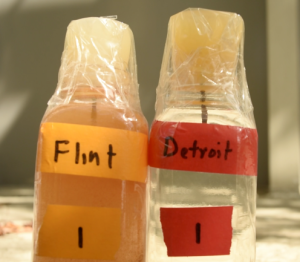 Get the lead out.

On the eve of President Obama’s trip to Flint, Michigan, human needs advocates and health care experts came together Tuesday to discuss how best to address the catastrophe of lead poisoning in the United States and its causes and effects.

Hundreds of participants from across the country participated in Child Lead Poisoning: Preventable Harm, a webinar sponsored by Coalition on Human Needs, Children’s Leadership Council, First Focus, MomsRising, the National Head Start Association and the Partnership for America’s Children.

Dr. Lowry, the lead poisoning medical expert, said experts have known of the threat lead presents to children since 1902, when its toxic effects in children were first discovered. Incredibly, in the early 1900s, at least one large paint company actually targeted children through advertising, noting that lead “tastes sweet.”

It is estimated that half a million children nationwide between the ages of one and five are endangered by having too much lead in their blood. This happens when water systems are compromised, as is the case in Flint and other water systems across the country. But it happens even more often in housing – especially in houses built before 1978, when the federal government banned lead in paint, and especially in older cities.

One of those “old cities” is the City of Brotherly Love. Philadelphia is described as the “poorest big city in America” by McCauley of Public Citizens for Children and Youth in Pennsylvania. She works to get the lead out of Pennsylvania’s older houses, particularly those rented by low-income tenants, where lead is much more likely to be present.

McCauley said Philadelphia has made progress on the issue by establishing “Lead Courts” where landlords and owners of lead-poisoned properties are held accountable and required to rehabilitate their properties. The city also had a successful “Lead Safe Babies” program – but federal funding for the effort has dried up, part of a nationwide pattern of cutting federal funds over the last several decades for lead abatement programs.

Pastor McCathern, who will meet with President Obama during the President’s visit to Flint on Wednesday, said that although so much nationwide attention has focused on Flint’s water problems, lead is a huge problem in Flint in other ways. Flint, too, has lead poisoning in paint. And it has lead poisoning in the ground, a legacy of the days when the automobile industry was king. “We always say ‘And then came the water’ because we have so many systemic issues affecting this community,” he said. “This is a man-made tragedy that we are experiencing in the Flint community. We are experiencing firsthand a huge humanitarian disaster here.”

Baldari, the Senior Policy Director for Family Economics and Legal Counsel at First Focus, said progress, while slow, has been made in Flint. She ticked off a number of Obama Administration initiatives that have helped local residents: expanded WIC, summer food, bottled water, expansion of Head Start and Early Head Start, more classrooms, home visiting support and transportation for children to visit the doctor, and early periodic screening and treatment services.

But more needs to be done – urgently, and especially in Congress. Here are several steps you can take right now to help the people of Flint:

You can demand that your senators pass the Drinking Water Safety and Infrastructure Act.

You can sign on to the letter circulated by the National Safe & Healthy Housing Coalition, asking Congress to adequately fund HUD’s and CDC’s efforts to fight lead poisoning.

You can access the social media kit prepared by First Focus, complete with sample tweets and Facebook posts.

For more ways to take action and for more information, visit CHN’s new lead poisoning resource page. A recording of the webinar also will be available there in the next few days

It’s time to get the lead out.