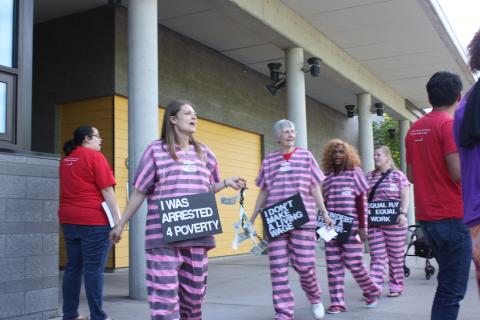 MykleAnn joind this group of women who formed a "chain gang" to protest measures sponsored by Sen. O'Ban that treat women and girls unfairly

MykleAnn kept it bottled up all these years, the memory of the night she'd gone off to a party in Tacoma, looking for fun, and wound up getting raped.

Bloodied and bruised, she never uttered a word to anyone out of fear that if her father found out, he would kill the guy and end up in prison.

She became pregnant as a result of the rape. "Thank goodness Indian Health Services and Planned Parenthood were there for me when I needed help," she reflects. "I probably wouldn't have graduated from high school and gone to college if I'd been forced to go through with that pregnancy."

Decades later, at midlife, MykleAnn is the mother of three.  She works at the Muckleshoot Casino and lives in Tacoma, WA.  Her father passed, never knowing of the trauma she bore alone all those years ago.

Recently, however, MykleAnn learned that a state senator from her area, Steve O’Ban, was sponsoring legislation to cut off Planned Parenthood funding and restrict the rights of teenagers to have abortions without involving their parents.  She was outraged. Why would this senator endanger vulnerable young women with such restrictions?

She knows from her own painful experience that some teens simply cannot safely tell their parents. Fear of her father’s anger and violence literally kept her mute for decades.  And so, on behalf of all the younger women who are too frightened to tell their stories, MykleAnn decided to break her silence.

She joined a group protesting outside of O’Ban’s office. "Women need access to birth control and abortion,” she chanted.  She hoped for the opportunity to look this man in the eye, share her story and ask him to rethink his proposed legislation.

O’Ban did not come outside.

But MckleAnn didn’t give up. Recently, she attended a public forum for the 28th Legislative District of Washington.

Though O’Ban was invited, he didn’t show up.

But that didn't stop MykleAnn.  When the time came, she stepped up to the microphone and told her story. One could have heard a pin drop in the room as she choked back tears. Then, with the determination of a mother protecting her loved ones, she explained why it’s so important for teens to be able seek the confidential advice of trained medical professionals. As she spoke, a burden lifted and MykleAnn discovered her voice as a citizen.

Check out her video here