For all the worrying moms and dads...

My kids can tell you, I'm an expert worrier.  I worry about whether I'm pushing them too hard or maybe not pushing them hard enough; whether their fear of vegetables will cause permanent damage to them; and whether they are getting enough exercise or alternatively, whether their favorite exercise of the season, playing football, is actually hazardous to their health.

So, I'm delighted that tonight I can sleep a little easier because I can cross a few major worries off my list.  And so can you:

These provisions are already making a huge difference in the lives of so many families in our nation, families whose voices are rarely heard, but who have been struggling and can now sleep better at night.

*Click on the map below to read the heart-warming, real life experiences of MomsRising members across the nation about how healthcare reform is already helping their families--and then take a minute to add your own experience too athttp://www.momsrising.org/blog/stories-map/?topic=healthcare 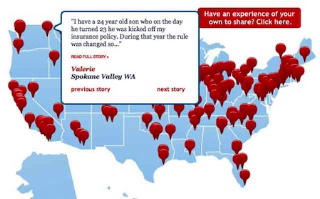 Why it is so important to put your experience on the map?

Many people are still unsure about how health care reform will affect their families and this lack of knowledge coupled with misinformation campaigns are fueling efforts to de-fund, repeal, and block the implementation of health reform.  Sharing your experiences and thoughts can make a big difference in combating efforts to repeal health reform.

You see, it turns out that the best way to build public and political support for the continued implementation of health reform is for regular people like us to share our personal experiences.[1] And the personal stories of MomsRising members are being listened to by elected officials who hold the very highest seats in our nation, reminding leaders that real people needed health reform and are benefiting from it already.

For example, yesterday President Obama spoke at an event in Falls Church, Virginia and brought forward the very personal story of Florida MomsRising member, Dawn Josephson, who shared her intense relief when she found out that her son, Wesley, could no longer be excluded from getting health insurance because he'd had eye surgery and would likely need additional surgery in the future. [2]

The transcript of MomsRising member, Dawn, sharing her story with the President yesterday is below, demonstrating why your personal experiences are so powerful:

MS. JOSEPHSON:  Thank you.  I’m Dawn Josephson from Jacksonville, Florida.  And I’ve been a self-employed entrepreneur since 1998.  During that time, the majority of those years I didn’t even have insurance, because it was simply too expensive.  In 2006, my son Wesley was born.  This is Wesley.

THE PRESIDENT:  Hey, Wes.  Come on over here.

THE PRESIDENT:  This is Wesley here.

MS. JOSEPHSON:  That’s Wesley.  He was born in 2006, and that’s when we got -- we finally got health insurance.  We’ve had a few different policies over the years, always had something excluded from it -- even something as silly as ear infections.  What kid does not get ear infections?  So, I mean, silly stuff.

In July of ‘09, he had eye surgery.  We discovered he had sudden onset of a condition called strabismus in the eyes, and his right eye needed surgery.  So we had the surgery, and less than a year later we said we needed new insurance.  What we had was killing us for our premium.  And this was right around the time -- right after the act passed.

The insurance company gave us an affordable rate -- we were looking for a very affordable plan.  And when she told us we were approved, my immediate response was, “But what’s not covered?”  And I knew full well we were going to have an exclusion for my son’s eye.  And she said, “You’re covered.  Nothing is not covered.”  And I said, “Okay, I’m not being very clear here with my questioning.  What about my son?” She said, “Yes, your son is covered.”  I said, “No, you don’t understand.  What if he needs another surgery on his eye?  Are you going to pay for it?”  They said, “Yes, he’s covered.”  And I was shocked.  And she said, “We can no longer exclude preexisting conditions for children.”

And it didn’t hit me until later that night when I was talking with my husband as to why she said that, and we started talking about it.  And I said, wow, something affected me personally from the government -- was really shocking.

So not only do we have a more affordable plan, but my son is now covered no matter what happens.  It is routine for children with strabismus to need multiple surgeries.  And I know now that that’s not going to have to come out of our pocket, which was a big fear.  So we’re very thankful and very grateful.  Thank you so much for everything you’ve done, President Obama, and everything that you’ve -- everyone has done to push this through because it’s really made our life so much less stressful.  It’s just an average American family.

THE PRESIDENT:  That’s a wonderful story.  Thank you, Dawn.

Our stories are powerful! Please take a second to put your own experiences on the map by clicking right here. (Sharing just a couple sentences is fine.)  And please forward this message on to family and friends too so they can add their voices and read Dawn's moving experience too.

Thank you for your strong and powerful voices!

[2] Video of the event yesterday with the President and MomsRising Dawn Josephson in Falls Church, http://www.whitehouse.gov/photos-and-video/video/2010/09/22/affordable-care-act-patient-s-bill-rights

P.S. Want an easy-to-use, fun guide to the many articles and resources on healthcare out there? Check out our healthcare blog carnival and join the conversation in the comments!

P.P.S. There's lots of confusion in the mix about health reform.  Help friends and family sleep better at night by sharing this line on Facebook, Twitter, email, text, or a local billboard (just copy and paste):  New protections for us all in effect today! Find out more @MomsRising #healthcare blog carnival: http://www.momsrising.org/your-new-rights #blogchat #hcsm