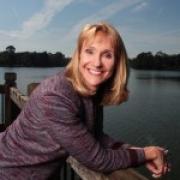 Nancy Hogshead-Makar
Share This
Add your voice to the comments

When my son Aaron was just 28 months old, he started to stutter. Not the easy disfluency that most children will have for short periods. This was forced speech that came with a stomach-flex and neck strain. When most kids are bouncing along with bumpy speech, they don’t know they’re doing it, they take their time, and they’re usually preoccupied with a toy as they’re talking.

Aaron, on the other hand, knew he was stuttering. One day he took four attempts to say “Mommy” before giving up, and then looked up at me with a pleading look, unable to tell me what he wanted. I knew this wasn’t something I could sit back and hope he would outgrow.

I recognized his forced-type of speech because I grew up as a stutterer. On a scale of 1-10, I’d say I was a 3. Not terrible, not debilitating… but it was there. I’d had a lot of speech therapy; most of it was completely ineffective, so I bumped along. But while in college, I suffered a traumatic event, and my stuttering zoomed to a 10. I couldn’t talk with my sorority sisters at mixers, my professors in class, or with the airline reservation office on the phone.

Rather than wait for my speech to return to “normal”, my mother enrolled me in a live-in, eight-week stuttering clinic in SUNY-Geneseo, New York, run by Pat Sacco in the summer of 1982. The program was rigorous. First, we rid ourselves of ticks, hand-jerks and eye-blinks by “stuttering openly and freely.” To an outside observer, our speech sounded much much worse, as we gave up our “tricks” to get out of a stuttering moment. Then we slowed our speech down so it was barely comprehensible. Dubbed “sick cow speech,” a one-syllable word could take three seconds, as I concentrated on moving my teeth, lips, tongue and voicebox with precision. As we speeded up gradually, every word was part of our therapy; ordering dinner at the cafeteria, telling jokes with clinicians, or asking for a restroom break. Every word.

Today I’d describe what I learned as mindfulness; moving my self into my mouth and strengthening those neural connections between brain and mouth. It isn’t so different from learning a complex sports skill. When I feel my speech going off-track, what works for me is to close my eyes, move into my mouth, say a few words a la “sick cow” and then speed up. Again, it isn’t much different from what I did as an athlete pulling inward and rehearsing mentally to “get into the zone” for an outstanding sports performance.

The Geneseo clinic and mindfulness has worked well for a 20 year-old, but my son was just a toddler. The recommendations were received for speech therapy were a lot like the ineffective therapy I suffered through as a teen. I eventually found Dr. Elena Caffentzis in New York City, who recommended we turn our house into speech therapy. We were instructed to give his speech a break; to talk slower than Mr. Rogers whenever Aaron was within ear-shot, to avoid interrupting him or even asking him questions. When I’d model extra-slow smooth speech back to him after a stutter, he would stare intently at my lips, silently copying me.

After six months of following these recommendations, Aaron was stutter-free.  I felt proud of the gift I’d given him.

Then Aaron had a bad third-grade teacher. He became anxious, shook his hands when he talked, and then started to stutter again. My mother pulled me aside and told me to get him out of that school. We switched Aaron to an outstanding private school, St. Johns Country Day School. His second day of school, he walked quietly over to me, got on his knees, hugged my shins and said, “Thank you for this new school.” (I can hardly tell the story without getting choked up!)

But the stuttering remained. It was about a 2 or 3 on a 10-point scale. His speech didn’t interfere with his academics, where he excelled as a straight-A student in honors courses. By 8th grade, his stuttering wasn’t worse, but it started to really bother him. His stuttering mirrored mine, and I could relate to his difficulty speaking casually in groups of good friends when witty zingers have to be delivered quickly, or the moment is lost. Aaron’s speech was preventing him from fully participating with his peers.

The big problem for me as a parent was that Pat Sacco had retired, and the SUNY-Geneseo clinic no longer existed. I was – and still am – skeptical of once-or-twice-a-week type speech therapy. I couldn’t have excelled in swimming with once-a-week coaching, and I thought it took a live-in level of commitment to re-wire the faulty neural connection between brain and mouth; at least it did for me.

I scoured the internet and my connections for hours, and finally found the Program for the Advanced Treatment of Stuttering, or PATS, run by Dr. Nathan Maxfield at the University of South Florida. Dr. Maxfield is not only a premiere speech pathologist, but also a SUNY-Geneseo stuttering clinic graduate. His summer intensive takes advantage of many of the same techniques I learned 30 years ago, and he has expanded on them as the academic research on stuttering has developed.

I prepped Aaron for three weeks of grueling monotony. “You’re not going to like it, but you’re going to like having the skills for the rest of your life.” And “Let’s get this stuttering out of the way while you’re just 14.” But that hasn’t been his experience. While Dr. Maxfield’s program hasn’t diminished in intensity, he’s also made it enjoyable. Aaron is just over half-way through Dr. Maxfield’s PATS program at USF, and I’m so impressed with my son’s commitment to the process. He gets in the car every day excited about what they’re doing … in speech therapy.  (Did I mention he is 14?)

One day Pat Sacco drove in to motivate the current crop of stutterers, and I got to have lunch with him.  It was one of those great full-circle moments; I got a little teary thanking him for my fluency. I can't imagine my life without it – frequent media appearances as a civil rights lawyer for women in sports, teaching law for twelve years, repeatedly testifying in Congress, international speeches… all impossible for a serious stutterer.

But probably equally as important, because of Pat Sacco’s program, I knew what to look for in a program for my son. I have no doubt Aaron will have some relapses, but thanks to Dr. Maxfield’s PATS program, Aaron will have the tools to get his speech back on track, and he can pursue whatever his life’s passions may be.