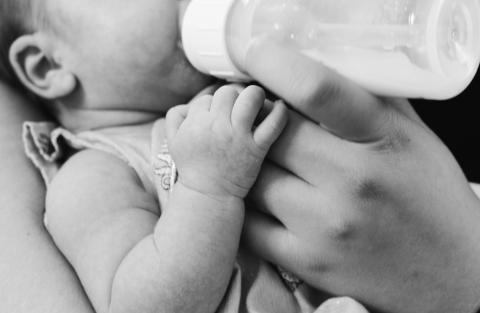 My son is 7 months old and drinks a combination of breastmilk and formula. A few weeks ago, I went to buy more formula. After striking out at two stores, I stood in the aisle of BJs and started to panic. The shelves were completely empty of all Similac formula, including Similac Pro-Sensitive, which my son drinks. I have always kept a small stockpile out of fear of running out, but I had to return 8 cans after the recall in February. By the time I realized there was a nationwide shortage of Similac, I was down to 2 ½ cans.

It’s hard to fully express what it feels like when you are unsure if you can safely feed your child.

The last time I switched my son’s formula we did it too fast and he got sick (spitting up, diarrhea, it wasn’t fun). I have been hesitant to switch him again, knowing that if I could just get my hands on enough of his formula he will continue to be happy and healthy. I spent the better part of two weeks driving around searching for formula and collecting cans donated or given to me by other moms in my area that reached out after I posted in some parent Facebook groups.

Right now we have enough formula to feed our son for about another 2 ½ weeks before we will have to seriously consider slowly switching him to another formula. I’m hoping it won’t get to that point–that I’ll be able to find enough formula to keep going or the shortage will be cleared up and the formula will be easily available again in stores.

A few days ago I sat down with Brian Dittmeier, Senior Director of Public Policy at National WIC Association to talk about how the shortage began and if there's an end in sight.

Here are a few key points he made:

Do not make homemade infant formula.

Do not feed whole milk to a child before age one.

And do not dilute your formula.

Need to find out if your formula has been recalled? Go to Similac's recall website, and enter the Lot Number. The site will tell you if it's been recalled. You can also call 800-986-8540 to find out.