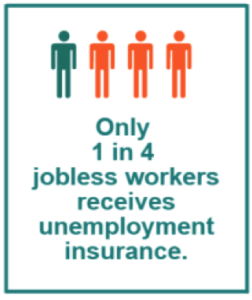 Fact of the Week: Only 1 in 4 unemployed workers receives unemployment insurance, a near historic low

NELP points to four main reasons for the steep decline in the percentage of unemployed workers receiving UI (known as the “recipiency rate”) over the past several years. These include deep and unprecedented cuts to benefits, state policies that discourage workers from applying for benefits, punitive work search rules, and increases in disqualifications for procedural reasons. To further address each of these four areas, NELP followed the report’s release with four fact sheets showing how states can change policies to increase the number of unemployed workers who apply for and receive UI benefits.

For example, nine states have significantly reduced the maximum benefits duration below 26 weeks, which has been the national standard for more than 50 years. This accounts for roughly 30 percent of the national decline of the percent of unemployed workers receiving UI. In Arkansas, unemployed workers are only eligible for 16 weeks of benefits. In Florida, which also cut the number of eligible benefit weeks, only 9 percent of unemployed workers received UI in 2016, a drop of 70 percent from 2007. North Carolina’s recipiency rate dropped a whopping 72 percent from 2007 to 2016. What makes these figures even worse is the fact that although the proportion of workers experiencing unemployment has declined, the average length of unemployment has actually increased nationally, from 16.8 weeks in 2007 to 27.5 weeks in 2016, meaning workers who cannot find jobs are struggling even longer without the help they need.

Stricter work search documentation rules, including extensive weekly or biweekly documentation, serve as a punitive obstacle course and harms workers rather than helps them find employment. Many states have also made the application and claim-filing processes harder, and numerous states now require that all claims be filed online; this presents barriers for workers with limited computer access/knowledge or literacy challenges. And in 14 states, more than 1 in 10 UI claims are denied because of a procedural reason, like failing to follow filing instructions. Low-income unemployed workers are the most affected by a decline in access to UI benefits, since they are least likely to have additional resources to fall back on.

Thankfully, our friends at NELP have presented states with recommendations to reverse the trend of declining recipiency rates and ensure that all jobless workers are getting the help they need to get back on their feet and back in the workforce. These include, in short:

Unemployment insurance kept millions of workers and their families afloat when they lost their jobs during the Great Recession, and it helped stabilize our nation’s economy. And while many of the workers who needed UI to survive during these times have since gone back to work, there are still 6.7 million unemployed Americans. With the threat of another economic downturn always in the future, the reforms recommended in NELP’s report are a critical first step to ensure the UI program is there when we need it. Sign Our Letter: Tax Credits for Working Families NOT Mega-Corporations!