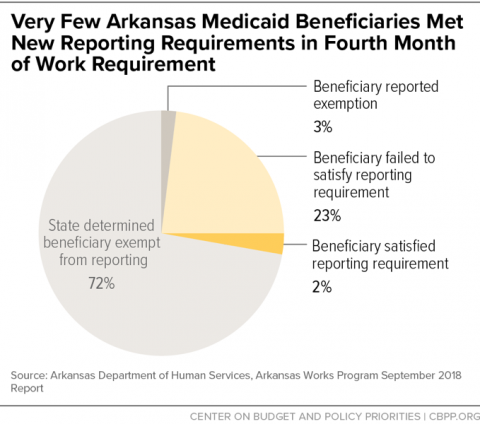 Fact of the Week: Nearly 8,500 Arkansans have been kicked off Medicaid since Sept. 1 due to harsh time limits

More than 4,100 Arkansans lost Medicaid coverage on Oct. 1, adding to the more than 4,350 adults in the state who were kicked off the Medicaid roles on Sept. 1. These nearly 8,500 adults lost their coverage due to the state’s harsh new work reporting requirements, which require beneficiaries to report at least 80 hours of work or work-related activities every month.

Those who are don’t report the required number of hours for three months lose their Medicaid coverage regardless of their reason for not reporting – whether they can’t find a job, have a job (or multiple jobs) with unstable hours that don’t get them to 80 hours a month, don’t have access to a computer to file their hours or have trouble using the online portal, can’t work because of health reasons that don’t qualify for an exemption, or don’t even know that they are supposed to be reporting their hours in the first place. And in Arkansas, once you are kicked off Medicaid for failing to meet the strict reporting requirements for any three months in a plan year, you are locked out of getting your coverage back for the rest of that year. For these nearly 8,500 adults, that means that they can’t get their Medicaid health insurance coverage back for the rest of 2018, even if they meet the requirements going forward or become exempt from them due to illness or other reasons.

According to the Center on Budget and Policy Priorities and the Arkansas Department of Human Services, nearly a quarter of Arkansans subjected to the reporting requirements – or more than 16,750 people – failed to meet them. As Jennifer Wagner with the Center on Budget and Policy Priorities (CBPP) pointed out, in addition to the nearly 8,500 people who have already been kicked off Medicaid, “Almost 5,000 beneficiaries now have two months of non-compliance with the work requirement and will lose coverage if they don’t report 80 hours of work or work-related activities for another month this year. And another 7,500 have one month of non-compliance and will lose coverage if they have two more non-compliance months. Thousands of them will likely lose coverage in the coming months.”

At an event held on Oct. 16 with the CBPP and the Hamilton Project, Marquita Little Numan with Arkansas Advocates for Children and Families talked about her state’s time limits. She said the policy is so administratively complex and difficult to navigate that people fall through the cracks. The online portal required to report hours has had all sorts of problems and goes offline for hours every day. When the reporting requirements started, there were so many problems with the website that the state extended the deadline for reporting, but many people never got that message. She noted that people with mental health issues, those facing homelessness, and many others caught up in the administrative barriers have all been hurt with coverage cuts. She stressed that rather than cut health care coverage, we need instead to address the barriers to meaningful work that those in and near poverty face, such as a lack of transportation options, a biased criminal justice system, and others. The event was held in conjunction with a new report from the Hamilton Project showing that the majority of SNAP and Medicaid participants who would be exposed to work requirements are working, but that a substantial share would fail to consistently meet a 20 hour per week threshold due to high volatility in the low-wage job market, health issues, and other concerns.

We’re written in the past about why work requirements don’t work and about how, despite claims that these harsh time limits help people get jobs, proposals to add work requirements are really just a way to push people off programs that help provide basic living standards, in part to pay for things like the bill Congress passed last December to give massive tax cuts to the wealthy and corporations. Now, however, thousands of people in Arkansas are feeling the very real effects of this harmful policy.

For more information about the punishing time limits in Arkansas, see these resources from Families USA.