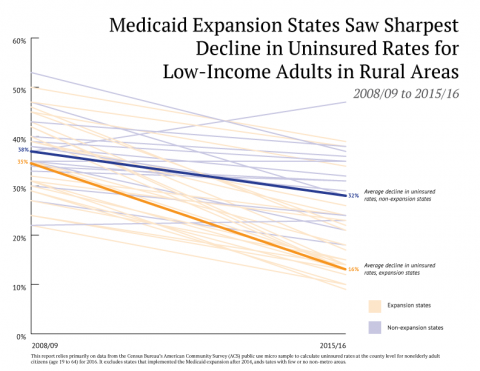 Fact of the Week: Drop in uninsured rates for low-income rural residents is three times larger in Medicaid expansion states

The uninsured rate for low-income adults has decreased in the last several years across America, thanks in large part to the Affordable Care Act. But small towns and rural areas of states that have expanded Medicaid have seen the sharpest decline in uninsured rates. That’s one of the findings of a new report from the Georgetown University Center for Children and Families and the University of North Carolina Rural Health Research Program.

The Washington Post compared the report’s findings to county-by-county voting data in states that didn’t expand Medicaid, and “found that rural counties that lack health-care coverage overwhelmingly voted for Trump in 2016.” As we know, the Trump Administration has been pushing to gut the Affordable Care Act, and in their latest act of doing so, is encouraging states to add harsh time limits to Medicaid in the form of strict work and reporting requirements. These new findings show that the Trump efforts will hit rural counties with his own supporters hard.

As our friends at the Center on Budget and Policy Priorities point out, rural areas face higher unemployment, lower labor force participation rates, and higher levels of part-time work, often with variable hours; this makes it more likely that large numbers of people in rural areas will lose coverage if a work requirement is in place. Online reporting requirements will also pose a problem, especially in rural areas where internet access can be spotty. Low-income rural residents already face less access to medical and social services. Our state and national elected officials should be expanding health care access to Americans living in rural areas, not making it harder for our rural neighbors to get the health care they need.