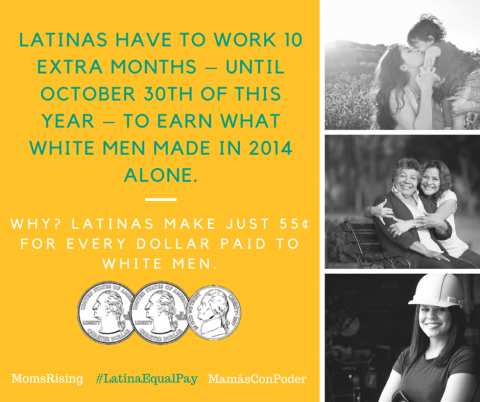 Put something soft on your desk right now, because what I’m about to tell you will have you so mad you’re going to have a "head-desk" moment (you know, a moment when you drop your head to your desk in frustration?) and I don’t want you to get hurt.

Ready? According to the latest U.S. Census, Latinas who work full-time, year-round, earn only .55 to the dollar compared to white, non-Hispanic men. [1] To put it another way, Latinas have to work for all of 2014 and all the way until October 30th (!!!) of 2015 to earn what white men earned in 2014 alone. Over time that gap really adds up. In fact, according to the National Women’s Law Center, “Over a 40-year career, women would lose hundreds of thousands of dollars to the wage gap—Latinas would lose over $1 million—and that doesn’t even account for inflation.” [2]

Turn that frustration into action and change! Send Congress a message: Closing the wage gap needs to be a priority. It’s past time to prioritize commonsense solutions like the Paycheck Fairness Act, which can help close the wage gap.

The wage gap is a big deal. In fact, the wage gap doesn’t just hurt women’s pocketbooks and family budgets; it also hurts our national economy. The Institute for Women’s Policy Research found that U.S. GDP would grow by 3 percent if women were paid as much as men. [3]

Over the course of the year we’ve marked several different “Equal Pay Days,” days that highlight how long it takes for women who work full-time, year-round to work to make what their male counterparts make in one year alone. For instance, when you take the average of all women working full-time, year-round compared to white men, then "Equal Pay Day" falls in April. For all moms who work full-time year-round compared to white dads who do the same, “Moms Equal Pay Day” falls in June (ironically right around Father’s Day). Using the same calculations, for African American women "Equal Pay Day" is in July, and for Native American women the date fell in September.

It isn’t until the end of October that we come to Latina Equal Pay Day. The wage gaps are simply unacceptable!

Opponents of equal pay policies like the Paycheck Fairness Act often brush off the wage gap as a myth – or as something that only exists because of the choices women make about jobs. But that is simply not the case.

The opponents are wrong. Even when controlling for job type, education, hours worked, etc. economists consistently find that the gap cannot be fully explained away by anything other than discrimination. And that gap occurs across occupations. [4]

This discrimination is happening through all occupations and across the pay scale spectrum. For instance, Latinas working in the highly-paid professions of physicians or surgeons make .46 to the dollar compared to their white, non-Hispanic male counterparts in the same job. [5] At the opposite end of the pay scale spectrum, Latinas are over-represented in some of the lowest wage jobs. And in those fields (home care workers, retail, service industry) Latinas working full-time, year-round, still face a wage gap –making .64 cents to the dollar compared to white, non-Hispanic men in the same fields. [6]

If we want a country where families and businesses thrive, this gap needs to close. We need policies like the Paycheck Fairness Act, because among other things, it would prohibit employers from retaliating against workers who discuss salaries with colleagues and requires employers to prove that pay differences exist for legitimate, job-related reasons. [7, 8]

*You can help change this unfair Latina Un-Equal Pay Day today! Take a moment right now to tell your members of Congress: It’s time to pass the Paycheck Fairness Act so we can get closer to equal pay.

Your voice is important. We need as many people as possible to sign on to this letter via the link above so Congress knows that moms, dads, and people who care about moms are paying close attention to this issue and are urging them to take action for the good of our families and our economy. If you know someone who could be impacted by the pay gap, please send this information to her, she will appreciate it!

And also, after taking action, please make sure to forward this email to your friends and family — and/or copy the action link to your Facebook and Twitter pages.

Unequal pay is hurting us all—and when we all come together to raise our voices, including to sign on to letters like this one, we can update our outdated policies and stop the wage gap.

Take Action!
Stand Up For Equal Pay for Latinas!