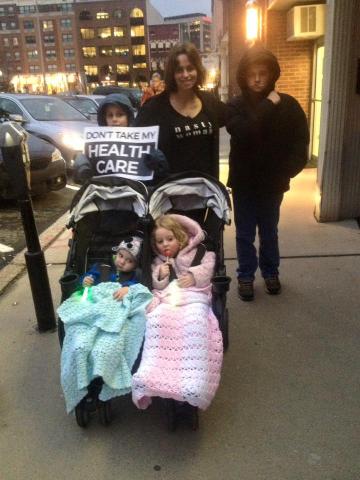 Activist Christine Clark stands up for ACA with her four kids

Educating Our Leaders About the Real Healthcare Experiences of Families

S. Nadia Hussain
Share This
Add your voice to the comments
Last Wednesday, I went to my Congressman’s office to hand deliver MomsRising’s healthcare storybook which has stories from moms and dads across the country, including New Jersey. I’ve called my Congressman’s office more times in the last two weeks than I have in the entire time I’ve been his constituent. I’d already made a few phone calls in support of affordable healthcare, but I knew that an in-person visit mattered.
Getting rid of the recent gains we’ve made in health coverage and the subsequent rolling back of critical programs like Medicaid and Chip will have a devastating impact on families. One of the key areas I work on at MomsRising are issues of maternal morbidity and mortality. The US currently has rising maternal mortality rates and is the only developed country in the world where this is the case. This is due in large part to the lack of access to healthcare and the shuttering of reproductive health clinics.
The Affordable Care Act (ACA) covers critical reproductive health benefits like co-pay free birth control and preexisting conditions (like pregnancy). It also expanded Medicaid for millions of people, which has been shown to be very beneficial for parents and kids. Getting rid of the ACA will hurt families who need these provisions to protect and prioritize their health.
I’m not new to supporting ACA. In 2012, I was a certified Covered California Educator. Covered California was the California state ACA exchange and it was my job to reach out to diverse Asian communities to teach them about and sign them up for Obamacare. I did presentations at Thai temples and community centers throughout the Bay Area to Tibetan, Nepali and Southeast Asian communities. I felt pride in knowing that I was helping to spread the word on new coverage options and key protections  to groups that were often marginalized when it came to health outreach, many of whom needed healthcare coverage. Statewide, our work on enrolling Asian communities was a big success, Asian Americans as a demographic were some of the highest enrollees of Covered California and to this day I am proud of my part in that.
My Congressman isn’t supportive of much of the progress we’ve made in healthcare coverage and has voted to defund Planned Parenthood. When I approached his office building, I did it with a sense of trepidation but was immediately comforted when I saw pro-ACA supporters rallying outside. Living in a Republican district, I was expecting to walk into less than friendly territory but seeing the supporters lining my way filled my heart with hope. I knew I wasn’t alone.
I handed off the storybook, told the staffer that I urged our Congressman to not roll back the coverage gains we’ve made through the ACA, Medicaid, and CHIP, and then excitedly ran out to join the rally.
The rally gathered members and community activists from NJ non-profits and actions groups. We marched from the Congressman’s building to the county Republican headquarters down the street and back chanting “Don’t take our healthcare away” and “Save the ACA”. After the march there was a small rally where speakers from the crowd shared why they supported the Affordable Care Act. Christine Clark, came with her four children to the rally and spoke on how she lost a beloved aunt suddenly due to her not having access to healthcare that could have prevented her tragic death. Another woman shared her story of working as a contractor for the last 20 years and when she asked Representative Frelinghuysen what she could do to get access to health care, he had suggested to her that she “go to Planned Parenthood”.  She finally got health coverage through the ACA. Others shared the positive impact of raising the age of coverage under one’s parents to and having pre-existing conditions covered.
I spoke and shared my concerns on the rollback of Medicaid and CHIP, and the devastating impact that this would have on families. Medicaid expansion helped mothers, pregnant women and kids get coverage and the idea that their benefits could be gutted is unconscionable. Rolling back Medicaid will also have a disproportionate impact on women of color, especially black women. I told the crowd that dismantling ACA and diminishing Medicaid will cost lives, it is a matter of life and death for families and we must take a stand against it.
With the onset of this new administration, it can be difficult to not be overwhelmed by the attacks on women’s health and health access for all. Yet on this day, I walked away feeling buoyant. The heart of politics is local, this is where movements are born and where changes actually happen. The current state of our country didn’t happen overnight, and the focus needs to be turned to our local elected officials. I look forward to future visits to my Representatives office and I look forward to expressing my concerns to stand with women and families.