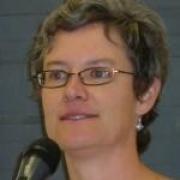 Allison Green
Share This
Add your voice to the comments

Fourteen years ago, a woman named Arline asked me on a date. She took me to lunch in downtown Seattle, where we ate oysters and watched ferries glide away from the dock. I couldn't have imagined then what it would mean to share my life with an immigrant. It turns out that it means many things, but perhaps of most consequence is that I am constantly learning about life through the eyes of someone whose first twenty-five years were radically different from mine.

Arline left Panama with her husband and three young children in 1979. Her half-sister was a U.S. citizen because she was born in Panama's Canal Zone to an officer in the U.S. armed forces. This sister moved to the Pacific Northwest and petitioned for Arline and her family to join her. Some years later, they became citizens. Fast forward twenty years: Arline and her husband have divorced, and she's asking me for a date.

In many ways, our life together has been charmed: grandchildren, travel, a house and dog. But if circumstances had been different, our life would have been unimaginably difficult.

I think, for example, of our friend Susan, born in the States, who met Vivi while living in Argentina. They fell in love, Vivi got a temporary visa, and they came to Seattle. But the law didn't respect their relationship; they couldn't marry so Vivi couldn't stay. Finally, Canada accepted them, undoubtedly in part because Vivi brought her professional skills as an architect, and now they live on an organic farm near Victoria. They are grateful for their new home, but it wasn't easy leaving the old one.

I think, too, of what happened when Arline's mother was dying in Panama. Because Arline could travel back and forth, she was able to move her mother from a substandard nursing home into a well-managed one. She spent a week with her, just two months before her death, as she recuperated from a hospital stay. I can’t imagine how it would have felt for Arline to be stranded on this side of the border; for her mother, it would have meant the difference between dying in a neglectful home, where her case of scabies was going untreated, and spending her last months in the comfort of professional care.

So much could have been different. Arline's children might have been Dreamers; instead, they have had the opportunity to live their dreams -- all three have attended college. Without documentation, Arline would have struggled to earn an advanced degree, let alone establish a career as a Spanish teacher. She probably would have worked for low wages, and she might have felt obligated to stay with her husband in order to have enough resources for her family. We may never have met.

Are these not simple desires? To live your life with the one you love? To attend your mother in her last days? To do meaningful, self-supporting work? Immigration reform is about simple desires.

Because our state has legalized same-sex marriage, Arline and I are now planning a wedding. I am delighted at the sea change in attitudes toward our relationship. I feel as if, step by step, I am emerging from a dim cave into bright light. Because of this, I can empathize with undocumented immigrants still living in the shadows. Our journey to legitimacy is not the same, but because I have now learned to see the world through different eyes, I recognize our fundamental commonality. All we want is to live our lives with dignity and purpose. All we want is that much respect.