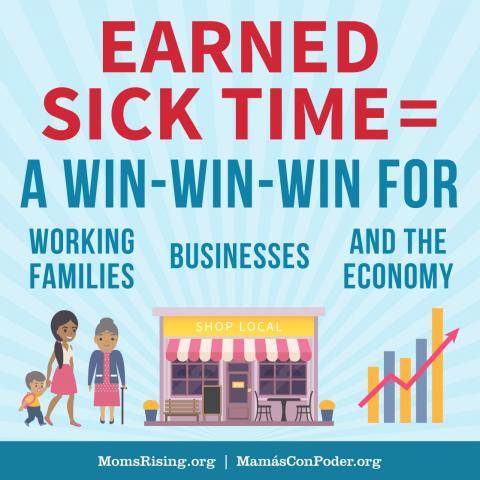 Sara Alcid
Share This
Add your voice to the comments
We could all use a win right about now...and we’re in luck! Family economic security policies aren't just moving forward in cities and states across the nation — U.S. Senator Murray and U.S. Representative DeLauro swooped in last week (Super Woman style) with the reintroduction of the Healthy Families Act, national paid sick days legislation, which is a true win-win-win for working families, businesses, and the economy!
→ Give these Congressional Superheroes some backup and urge your members of Congress to co-sponsor the Healthy Families Act too!
Facts, yes real facts still exist thankfully, show that this policy boosts families and the economy. And in these uncertain and tenuous times, it’s more important than ever to fight for the 41 million workers, including HALF of all working moms, who can’t earn a single paid sick day to stay home when they come down with the flu — or need to care for a sick child.
Over 160 countries have passed this type of policy — and we can too. Now is the time. We can, and we must, fix this!
This is a critically important policy for families, businesses, and our economy. Without the ability to earn paid sick days, working families are faced with impossible choices between sending a sick kid to school and going to work sick— or staying home and losing an invaluable day’s pay, or sometimes even losing their job.
Together with raising the minimum wage, paid family & medical leave, and equal pay, paid sick days helps ensure the economic security of families across our nation, especially in the most vulnerable communities, including communities of color and Muslim, immigrant, and LGBTQ+ families, as well as rural communities, all of whom are disproportionately facing unjust and harmful actions from the Trump Administration.
TELL YOUR MEMBERS OF CONGRESS: Nobody wins when public health and economic & job security are under threat! Co-sponsor the Healthy Families Act today!
Paid sick days are also a big win for businesses because they reduce turnover cost, boost workplace morale, and help stop the spread of illness among workers. Plus, employees coming to work sick because they don't have access to paid sick days costs the national economy $160 billion annually because of lost productivity. It's no wonder so many businesses support paid sick days!
It’s time for this policy to move forward! We're the only developed nation in the world without a national paid sick days law and we’re overdue for a change on that! Why? Well, for an average family without paid sick days, just 3.5 days of missed work is the equivalent to an entire month of groceries. And nearly one in five low-wage working mothers have been fired for needing time off because they or their child is sick.
The Healthy Families Act is historic legislation that would allow workers in businesses with 15 or more employees to earn up to seven job-protected paid sick days each year to be used to recover from their own illnesses, access preventive care, provide care to a sick family member, or attend school meetings related to a child’s health condition or disability. Workers in businesses with fewer than 15 employees would earn up to seven job-protected unpaid sick days each year to be used for the same reasons, unless their employers choose to offer paid sick days.
*CLICK HERE to quickly & easily urge your U.S. Senators and U.S. Representatives to support this commonsense bill that will boost working families, businesses, and the economy!
Without the opportunity to earn paid sick days, the realities that Donna, Mary and Annette share below are par for the course:
“I work in a factory where people come into work even when they are sick because they can't afford to stay home. You can't get well that way!” - Donna, Toledo, IL
“I work at a daycare center. Kids come in when they are sick because parents have no other option. This is a public health issue for families with young children.” - Mary, Pella, LA
“I know personally that it is gut wrenching to be sick enough to be unable to go to work, and knowing that my paycheck will be reduced and make everything, including medicine even harder to afford.” - Annette, Presto, PA
We're building off unprecedented support for paid sick days across the nation. Thirty one jurisdictions (cities and counties), seven states, and the District of Columbia have already passed paid sick days for their residents and workers! But access to paid sick days shouldn't depend on your zip code – we need a national paid sick days standard!
TAKE ACTION: Tell your members of Congress to co-sponsor the Healthy Families Act and push this important legislations forward for families in your state!
Together, we’re a powerful force for women and families.
Take Action!
Tell Congress: Advance Paid Sick Days with the Healthy Families Act!