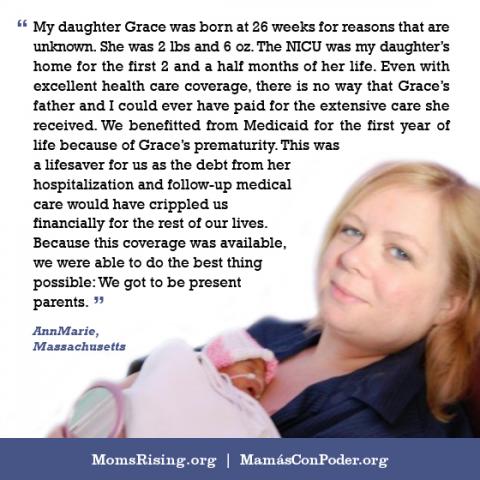 This week the U.S. House of Representatives and Senate released their federal budget. I’ll cut to the chase—it’s pretty awful! One of the most troubling parts of the budget is the changes and cuts some in Congress want to make to Medicaid. If this version of the budget is allowed to pass, tens of millions of people will become uninsured or underinsured.

Moms and dads can’t allow this to happen. We need all hands on deck!

**Write your members of Congress today and tell them to reject the draconian cuts to Medicaid in the budget and protect the healthcare of families around the country. http://action.momsrising.org/sign/NoCutstoMedicaid/

The proposed budget turns the Medicaid program into a block grant, which essentially puts a cap on the amount of money that can be spent on the program. They call it giving states more flexibility, but what this really means is states could cut eligibility and scale back benefits, hurting people who need healthcare the most. The proposal also blocks Medicaid expansion, which already allowed millions of families to gain healthcare coverage. All of this would lead to people losing their much needed healthcare.

Medicaid coverage not only helps those enrolled, but also is a critical support for families, especially those of us who are caring for children, have aging parents, or have family members with disabilities. Families like AnnMarie’s:

"My daughter Grace was born at 26 weeks for reasons that are unknown. She was 2 lbs 6 oz. The NICU was my daughter’s home for the first two and a half months of her life. Even with excellent health care coverage, there is no way that Grace’s father and I could ever have paid for the extensive care she received. We benefited from Medicaid for the first year of life because of Grace’s prematurity. This was a lifesaver for us as the debt from her hospitalization and follow-up medical care would have crippled us financially for the rest of our lives. Because this coverage was available, we were able to do the best thing possible: We got to be present parents.”

Help us speak out for moms like AnnMarie and the millions of other people who would be harmed by the proposed House and Senate budget cuts to Medicaid. Write Congress TODAY: http://action.momsrising.org/sign/NoCutstoMedicaid/

Instead of providing support to struggling families when they need it most, this budget increases barriers for families trying to care for sick loved ones and avoid medical debt.

Why is Medicaid so important? Overall, Medicaid provides health coverage for approximately 68 million people, including children, low-income pregnant women, children and adults with disabilities and chronic illnesses, and the elderly. In fact, 70% of all nursing home residents use Medicaid.

These cuts and changes to Medicaid are NOT ok! In years past, we have been able to push back on similar proposals, but only because we made our voices heard loud and clear! We are going to need YOUR help in making a swift and loud response because Congress is going to vote next week on the budget.

**The only way we are going to be able to stop these changes and cuts to Medicaid is if YOU speak out! Write your members of Congress TODAY:

We need your help standing up for the rights of all Americans to be able to get the medical care they need, when they need it. This budget proposal is a major threat to the Medicaid program, which so many families rely on. Once you take action post this link to Facebook and Twitter in order to encourage more people to take action: http://action.momsrising.org/sign/NoCutstoMedicaid/.