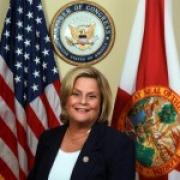 Ileana Ros-Lehtinen
Share This
Add your voice to the comments

The Republican Party has to face the changing demographics and needs to do a better job of reaching out to minorities. As Republicans we don’t have to change our philosophy, we just need to have a message that appeals to those minorities and have a better way of delivering that message without the vitriol that has been the norm in the past.

Hispanics as well as all demographics are concerned with the current economic crisis and the need for more robust job creation. When Republicans talk about the economy we need to do so in terms that people understand, we need to speak in terms of bread and butter issues, that is the language spoken by families around their kitchen tables. As conservatives, we care deeply about the plight of those less fortunate, but we also believe that government cannot solve our problems because we then have a dependent society. We believe in the individual, in their power, and the exceptional nation that is the United States.

A hard political reality is that true immigration reform will probably not take place until the border security concern is addressed first. Border security is essential to our national security. Many Members of Congress want to make sure that our borders are protected first and that we make every effort to stop the spigot of illegal immigration along our porous borders. Also, border security is crucial to national security. The American people want to make sure our borders are secure.

Throughout my years in Congress, I have been committed to addressing the problems in the current immigration system and providing an effective way to address these problems. I have worked to extend Temporary Protected Status (TPS) for U.S. residents from Nicaragua, El Salvador, Honduras, Haiti and other nations. I am also a co-sponsor of the DREAM Act, which would allow immigrant students to continue their college education. In order to achieve true and lasting immigration reform, we must provide an eventual path to a permanent legal status for those who reside illegally in our nation, but first we must and I emphasize must, secure our borders.