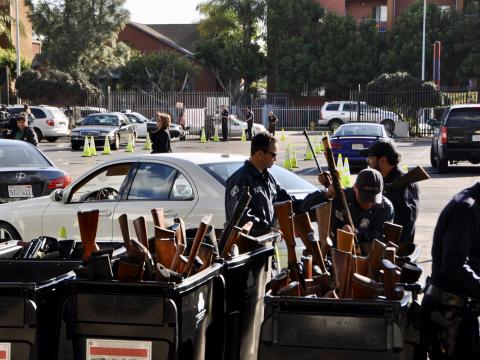 To-wen Tseng
Share This
Add your voice to the comments
I am an American but my job allows me to look at America with a foreigner’s eye—I’ve spent most of my career life working as a U.S. based correspondent for a various of Chinese media outlets. Through the years I can’t help it but notice many senseless things in this country’s system. Paid family leave, for one. Gun safety, for another.
Last month I wrote a piece on how to talk to kids about tragic events for Taiwan’s Commonwealth Parenting Magazine in light of the Las Vegas shooting. Even though the attack happened here in America, increased anxiety among children in other countries is common, because social media makes the world feel very small.
In the article I quoted one of the experts I talked to and pointed out that “parents can tell their children that security will likely be increased in response to an event like this to work to keep people safe.”
Soon after the article was up on Commonwealth Parenting Magazine’s website, I received a message from a man, describing himself as a Taiwanese American, a faithful reader of the magazine, and a father of two. In the message he asked me “so what has been done to increase the security and keep people safe?”
I was embarrassed because I did not know what has been done to increase the security. In fact, I would say that nothing has been done even after repeated mass shooting. Merely one month after I wrote that piece, we had Sutherland Spring shooting and then Rancho Tehama shooting. Yet nobody seemed to give a damn.
My husband and I dared not to talk about these news stories at home because we’re afraid that our 4-year-old would, too, ask questions like what has been done to keep people safe. I know I would not be able to answer his question in spite of that article I wrote. How ironic.
Our 4-year-old already senses not everywhere is like this. He has cousins living in Asia and Europe, where nobody carries gun around. He wants to know why this is the case here in the U.S. I, on the other hand, cannot talk to him about something that I cannot make sense of myself. I cannot tell him that gun ownership stops crimes as a few of those interest groups claim because hard numbers show that an armed home is not a safer home.
I need to think of what to tell my children. That’s why I’m thrilled to learn that Senators introduced assault weapons ban. Now at least after every mass shooting with a military-style assault weapon, I can tell them that a tool to reduce these massacres is sitting in the Senate, ready for debate and a vote.
As Senator Dianne Feinstein (D-CA) stated in a press release, “To those who say now isn’t the time, they’re right—we should have extended the original ban 13 years ago, before hundreds more American were murdered with these weapons of war.” Let’s urge the Congress do their job and stem the tide of gun violence.