Children Occupy Wall Street: It’s About Sharing. They get it! Why doesn’t everyone?

With no school on Columbus Day in New York City, organizers of #OccupyWallStreet (OWS) put out a call for children to join them in lower Manhattan for an OWS Children’s Assembly.

My kids and several of their friends attended, and worked their way into the inner-circle of children ranging in age from toddlers to teens. The children came from all over the city, representing diverse communities.

The meeting began with a question posed to the children, “Why are you here?” 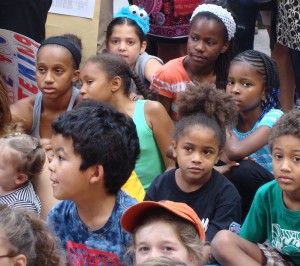 My mind immediately began to recall quotes from all of those journalists and pundits who are always so completely confused about Occupy Wall Street. CNN anchor, Erin Burnette, after visiting and interviewing people at OWS said, “No one knows what they are protesting.”

News anchors like Erin could use some help from a few school children who were so clear about purpose, and percentages, it makes you wonder where she went to school.

One by one the children articulated what they understood was the bad behavior that had brought everyone out to say, "No, no, no.” Someone was not sharing.

Child: “We are here because it is mean not to share and the banks are not sharing.”

Child: “A few people control everything [and] are not sharing with everyone else, the 99%.”

Adults couldn’t believe how simple it all was. Greed. Kids don’t like it. Most of us, don’t like it.  Why can’t mainstream media understand this disdain? Are they totally desensitized to greed? Were they in one of those really accelerated educational programs where they skipped Kindergarten and missed that curriculum on the principles of sharing? 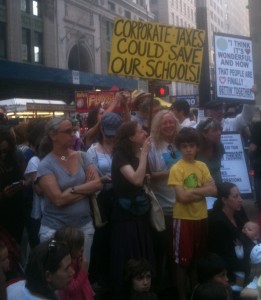 As the New York Times recently reported, "When the protesters say they represent 99 percent of Americans, they are referring to the concentration of income in today’s deeply unequal society. Before the recession, the share of income held by those in the top 1 percent of households was 23.5 percent, the highest since 1928 and more than double the 10 percent level of the late 1970s.  That share declined slightly as financial markets tanked in 2008, and updated data is not yet available, but inequality has almost certainly resurged. In the last few years, for instance, corporate profits (which flow largely to the wealthy) have reached their highest level as a share of the economy since 1950, while worker pay as a share of the economy is at its lowest point since the mid-1950s." [1]

Child: “Some people are not sharing and they control a lot of money that could help our schools and hospitals. And they are only like 1%.”

Child: “Banks are being greedy and so people lose their homes and jobs, and they get homeless.”

Luckily, our teachers and our parents taught most of us that no one has achieved the success they have on their own.  And, it is downright rude not to share. We were taught that this particular type of greedy bad behavior not only made you look bad; it shines a negative light on your whole family and community. 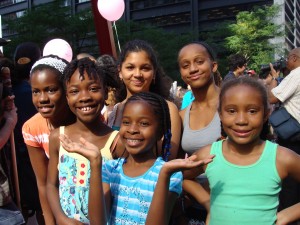 Nisa (11), “I thought OWS was very moving and inspiring.  The moving part of it was that so many people were taking time out of their life to stand up for people in this country. They know that 41 % of Black children are impoverished and they're saying that even though I don't know those kids, I'm going to stand up for them anyway. The inspiring part is that hundreds of people are in a small space together and they don't even know each other, but are willing to be in a small cramped space but still work together.  If I see that they can do that, then I know I may not be able to do something as big as that, but I can definitely make a change. I think it's about proving to the government and the banks that they
can't just harm our society.”

Ixe (10), “It was pretty cool, and very exciting there were a lot of things going on. My favorite part was the dancing dragon and the drummers. Making the sign was also fun. Out of a score of 1 to 10, I give it an 8.

"It was about how the government is not listening to the people. It was a protest against a whole bunch of things I don't know all the things but some of it is about how 1% of Americans are very rich, and 99% are poor and in the middle. People protest because the government isn't really listening to the people. They want to be heard. They don't tax the rich, they only tax the poor and the middle class, and they end up having less money. I hope the government realizes they are disrespecting the people. I don't like the fact that the people need to sleep outside on the street and yell curses at Wall Street to make their point. I'm not sure its a good idea cause people could get sick from being out there especially the people under 17.

"I made a sign and held it up with the people, and I felt like I was doing a good thing by making a statement and a commitment hopefully the government will pay attention and things will change.” 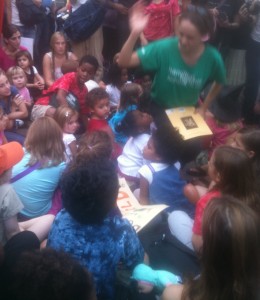 I asked my own 12-year-old, Naima why she thought so many people in the mainstream media don’t understand the occupations. She said, “Sometimes people don’t want to understand that what they are doing is wrong. Especially, when they don’t want to stop doing it.”