Children Have Suffered the Consequences of Our Immigration Policies 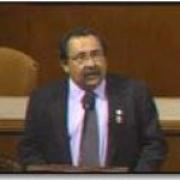 Raul Grijalva
Share This
Add your voice to the comments

Tearing families apart isn't in anyone's interest. We all know that. But according to a recent report by U.S. Immigration and Customs Enforcement (ICE), more than 46,000 parents of U.S. citizen children were removed from the U.S. between Jan. 1 and June 30, 2011. During the same period, ICE sought orders of deportation, exclusion, or removal in the cases of an additional 39,918 parents of U.S. citizen children.

These deportations shatter families and endanger the children left behind. Our immigration laws should not conflict with our moral obligation to protect the rights of children.

Katherine, Mateo and Heidi have testified at special ad-hoc hearings I've hosted about the lasting impacts of shortsighted and overreaching immigration policies on children and adolescents.

Here is just part of what Katherine told me and my colleagues: “It was very hard for me. Every time when I went to school I kept thinking that maybe I would see my parents when I came home. I would also have bad dreams, like the deputies were taking my family and me to jail.”

This is a young girl in the United States of America today.

Heidi described not only the pain and fear she experienced, but also the overwhelming responsibility of having to care for her three younger siblings while her mother was detained. She remembered wondering, “What was going to happen to them? And what about my little brother that my mom was breastfeeding?”

Mateo told us, “I am 11 years old and . . . I am always worried when my family leaves the house that something might happen to them. I think about it when my dad goes to work that he might not come back or when I go to school that there might not be someone to pick me up when I get out.”

As immigration enforcement spreads across the country and more parents of U.S. citizen children are deported, we must continue to raise serious concerns about the impact of these deportations on children.

Children -- our most vulnerable citizens -- are the collateral damage of a broken immigration system. Our actions and failures on immigration policy have very human and very widespread implications.

Children are better off living with their mothers and fathers. That's not a political question, it's a fact. We must build an immigration system that protects the unity and sanctity of the family.

Children have no political affiliation. They have few lobbyists. They are dependent upon adults to solve complicated issues and provide them with a safe and healthy environment. This Congress owes it to the country to ensure that children are protected and children are not unnecessarily separated from their parents.