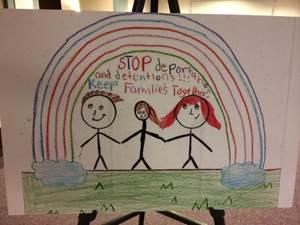 We Belong Together letter-writing campaign

Celebrating a Step Forward for Children in Immigrant Families

Today marks the 4th year that children from around the country have come to the nation’s capital as part of We Belong Together’s 2014 Wish for the Holidays Campaign to deliver letters written by thousands of children calling for the reform of immigration policies to keep families together. Last night, we celebrated four years of amazing letters and drawings at a reception and exhibit at the National Education Association.

First Focus is a proud partner of the We Belong Together Campaign, and I’ve personally had the privilege of participating in Wish for the Holidays every year since the very first letter drive in 2011. Every year, whether we were delivering letters to Congress or the White House or both, we always commented about how much we looked forward to the day that we could finally deliver thank you letters. And that’s exactly what’s happening today: children will be thanking our President for taking a stand for immigrant children and families through the recently announced executive actions.

In recognition of how far we’ve come, today First Focus released a new analysis entitled A Step Forward: Immigration Executive Actions & Our Nation’s Children, which highlights the important impact of these actions in the lives of children. There is no doubt that the new executive actions will have a significant impact on children living in mixed-status families as well as on older DREAMers who were denied access to the 2012 Deferred Action for Childhood Arrivals (DACA) program simply because of the arbitrary age cap. For example, we know that up to 300,000 more DREAMers will now qualify for the expanded DACA program, enabling them to better pursue their college and career goals as demonstrated by the success of current DACA beneficiaries.

We also know that up to 4.5 million U.S. citizen children living in mixed-status families will no longer have to live in fear of having a parent ripped away from them. That means fewer families torn apart. That means fewer children having their world turned upside down, suffering mental trauma, and being pushed into poverty. That means fewer children forced into foster care. And not only that, but the parents who qualify for the new Deferred Action for Parental Accountability Program will also be able to apply for work permits, enabling them to secure more stable employment and critical income supports. Strengthening parents means they will be better able to meet their children’s basic needs and focus on being parents. And that means children will be healthier and do better in school, which is a win for all of us.

And while the new executive actions will go a long way in keeping families together, we also know that not every child will be able to sleep soundly, knowing this his or her mom or dad is safe, and not every family member will be free from the fear of deportation. Half of our undocumented population will remain vulnerable, including parents of DREAMERs, young children too young to apply for DACA, parents who have already been deported, and parents of U.S. citizens who have been here less than 5 years. We also know that these executive actions are temporary and fall short of citizenship, meaning that beneficiaries will continue to lack access to critical safety net programs like federal healthcare and nutrition programs. That is why we will continue to work in partnership with the We Belong Together Campaign and others to make sure that Congress finishes what the President started by passing comprehensive immigration reform.

Near my desk in my office, I have one of my favorite letters from the Wish for the Holidays campaign. It was written by an 8-year old girl from my hometown of Indianapolis, who had lost a father and other family members to deportation. And while she shared her sadness, she also shared her hope. She wrote, “ I know I we can change things, because if you believe and try really hard, your dreams can come true.” And she’s right—we just need to keep believing and working hard—and force our nation’s leaders to do the same, and then we can make the dreams and wishes of millions of children and families in the U.S. come true at last.