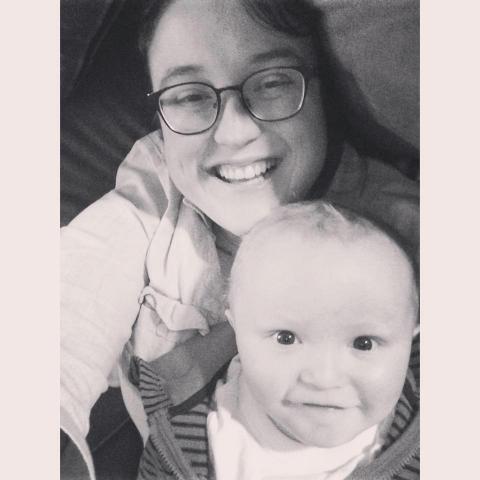 Breastfeeding Stories: An Office With a Window

Christina P. is from Washington State. This is her story...

When Christina’s son was born in the summer of 2013, she was working full-time at a national pizza delivery company. Like most service industry employers, her company did not offer health insurance, sick pay, or maternity leave. Christina was determined to work as long as possible into the late stages of her pregnancy so that she could save every penny and take two months off without pay when the baby came.

Baby Calvin was due September 2nd, which meant Christina was lugging around 40 extra pounds on her belly for the hottest part of the year. She worked next to two 450 degree ovens and stood on her feet for eight or more hours at a time, often with no time for a break to sit down. She pushed myself as hard as she could.

On Calvin’s due date, Christina had an emergency c-section. She couldn’t sit up normally for a couple of weeks. Positioning him for nursing in such a way that he would not kick her incision was an infuriating challenge.

When Christina went back to work, she had to try to fit pumping into quick, 10-minute breaks which had to include time to set up her breast pump, relax enough to express milk, and clean the equipment. For Christina, like many women, it took 2-3 pumping sessions to produce enough milk for just one feeding.

At first, Christina was asked to pump in the store’s utility closet where it stored high-powered chemical cleaners – which were right next to Christina and her pumping equipment. When Christina expressed concern about the closet, she was told she could pump in the manager’s office. The only problem? It had a window that looked out into the lobby of the store.

With limited break time and no suitable place at work to pump, Christina ended up supplementing with formula.

Paid family and medical leave and stronger breastfeeding accommodations would mean moms like Christina could return to work productive and healthy while providing their children with the sustenance they need. We can and we must do better for working moms.