Joan Blades
Share This
Add your voice to the comments

As the economy slowly recovers, it's no secret that companies would like to boost productivity and profits. Many think the best way to do so is to slash costs. As an entrepreneur and business owner, though, I'd like to suggest another idea: Pay your employees more. 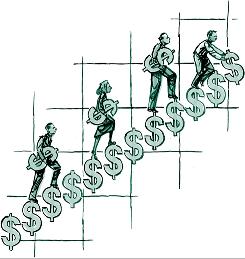 That's not as crazy as it sounds. A growing body of evidence is revealing that companies that pay fair wages, and offer flexibility and training to even entry-level and lower-skilled employees, do better than those that don't. A vast number of businesses mistakenly assume that their lowest-wage workers are easily replaced or not worth investing in, but those that do the right thing soon find that they're doing the right thing for their bottom lines. It's time that this becomes a business norm.

Certainly, in tough times, higher wages, profit-sharing and training seem like optional perks. But here's the other side of the story: When you invest in people, they respond by performing well. In her rigorously researched book, Profit at the Bottom of the Ladder, Jody Heymann presents a well-documented lineup of businesses that have flourished in large part because their management practices include respecting and empowering their lowest-paid workers. Jenkins Brick, a major U.S. brick manufacturer in Alabama, credits higher wages and profit-sharing with increased productivity and quality, as well as reduced turnover and lowered accident rates. Dancing Deer, a Boston-based high-end baked goods company, opens the financial books, and makes training and stock options available to all employees because they are convinced that this gives the firm a competitive advantage. Specifically, management credits these practices with improving sales, boosting productivity and helping them attract talent.

Perhaps a more well-known example is Costco. The company pays more for an entry-level position than Sam's Club (Wal-Mart's wholesale branch), gives even part-time workers at least a week's notice about their schedules and offers all employees the option of getting on the management track. Costco also makes thousands of dollars more per employee than Sam's Club, which suggests their investment pays off. Costco is so convinced that its policy is sound that it has kept paying better wages than rivals, even as Wall Street has pressured the company to conform to industry standards. Trader Joe's is another large company known for paying its entry-level workers well and benefiting as a result.

Yet despite the strong evidence we have that an employee who is paid fairly and treated respectfully will significantly outperform an employee who is underpaid and ordered around like a child, too many employers are unable to resist the apparent bargain of paying less per hour or buck the traditions of an authoritarian work culture. They tell themselves that standing at a cash register, working in an assembly line, or answering phones is so simple that anyone can do it — that workers doing these jobs can easily be replaced. And this shortsighted approach costs them. Simple math does not capture the human dynamics.

As an employer, I can personally bear witness to both the quantifiable and the more subtle benefits of treating everyone in the workplace with respect and dignity. The people who answered the phone and greeted visitors at our front desk at Berkeley Systems, the software company I co-founded, were at the bottom of our pay scale, but we knew that they also created people's first impressions of our organization. If they felt downtrodden, the first impression of our business was likely to be merely adequate. We needed the first face of our business to be enthusiastic and helpful.

At MomsRising.org, an advocacy group working for greater economic security for families, we offer flexible work hours, ask each member of our team to contribute to our decision-making processes, and look for pathways for our entry-level positions to grow into roles with more responsibility.

It's time for employers to see the big picture and embrace the benefits of creating a great workplace for all of their employees. They will be rewarded with a happier, more productive and robust workforce, a better bottom line and the satisfaction of participating in the transformation of modern work culture to a culture of dignity.

Joan Blades is a serial entrepreneur and co-author of The Custom-Fit Workplace: Choose When, Where, and How to Work and Boost Your Bottom Line.