Bipartisan Idea to Lift Millions Out of Poverty

President Obama in his State of the Union address called us to a better politics, and Gov. Nikki Haley (R-S.C.) likewise called for us to resist the temptation to “follow the siren call of the angriest voices.” Such remarks should bring glimmers of hope to voters frustrated by a hyper-partisan Congress that is often unable to pass pragmatic legislation on areas of broad bi-partisan agreement.

One of the clearest and most impactful next steps Congress can take in 2016 is to expand tax credits for low-income workers who don’t have dependent children: a bipartisan idea that would lift millions out of poverty. President Obama described this proposal in his speech as a strategy “we can all support,” and prominent Republicans including House Speaker Paul Ryan (R-WI) have favored it. 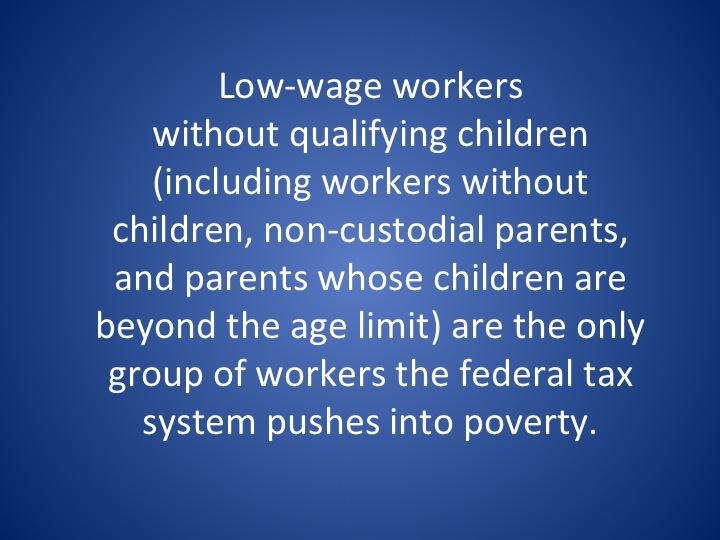 Last month, Congress recognized the importance of tax credits for low-income workers by ensuring that these credits will not expire for families with children. That means a minimum wage-earning mother with two children will not lose her $1,725 tax credit. These credits for families with children are increasing incomes for 16 million people. They provide a proven work incentive, and the work-plus-tax-credit package is lifting millions out of poverty.
But we do far less for workers without dependent children. Millions of childless cooks and restaurant workers, home health aides, maintenance and housekeeping workers, retail staff and many more are taxed into poverty, creating disincentives for work and inflicting needless suffering. When clear, proven pathways out of poverty, widening them is the right thing to do.

Surprisingly, a woman with adult kids who works in a nursing home at a poverty-level wage of $12,566 gets a tax credit estimated at only $172 for 2015. If she manages to increase her hours to full-time at the minimum wage, her tax credit drops to only $23. The same goes for a young man just out of school in an entry-level job struggling to make ends meet.

Proposals by Obama and Ryan would raise the credit for the poverty-level worker from $172 to $841. The full-time minimum wage worker would see his or her credit rise from $23 to $542. While not the complete answer to low-wage work (raising wages would help a lot), this advance would do more to make work pay and to help workers make ends meet.

Expanding the Earned Income Tax Credit as Obama and Ryan have proposed would help young workers just starting out by making the credit available to people as young as 21 (under current law, you can’t be younger than 25). It will help middle-aged and older workers (raising the maximum age from 64 to 66). It will help 13.5 million workers, either by making them newly eligible or by increasing their credits. Ten million poor people would see the severity of their poverty reduced; 500,000 would be lifted out of poverty. Unfortunately, not every job is a ladder out of poverty, but these tax credits provide just that for many working Americans that elected officials claim to represent.

Faith communities have lobbied persuasively for this tax cut on the principle that every great society is measured by how it cares for the least among us. Others have focused on the importance of helping more young people get a foothold in the labor force, or the greater support that noncustodial parents can provide to their children. These are central values shared by the vast majority of Americans.

It’s amazing what we can do when we come together. Millions of children provided with a brighter future, families and communities strengthened. Such a small yet powerful step forward will also be welcome proof that our leaders can overcome partisan divides to work for all of our people, not just the well-connected.

[Note: This post originally appeared in The Hill’s Congress Blog on January 21. This piece was co-written by Deborah Weinstein, the Coalition on Human Needs' executive director, and Rev. Jennifer Butler, CEO of Faith in Public Life. With many thanks to the Center on Budget and Policy Priorities and the National Women’s Law Center for their excellent work on this issue, which the authors drew upon heavily. If you'd like to receive similar posts in your inbox, subscribe to the CHN's blog, Voices for Human Needs.]