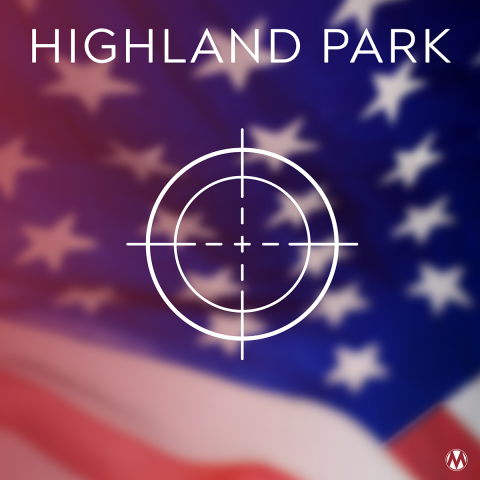 A Fourth of July neighborhood parade. Another young white man with a military-style semi-automatic assault rifle, who, this time, killed six people and injured 26 more, many of them children. [1] Our scarred hearts are again aching for the victims, their families, and the Highland Park community.

There’s no good reason for civilians to own high-capacity magazines and weapons designed for war, especially civilian young men who could barely be considered adults.

Tell Congress we need comprehensive gun policy reform now, including a ban on military-style semi-automatic assault weapons and high capacity magazines, and raising the age of gun purchases to 25.

The Highland Park mass shooting occurred mere weeks after the Buffalo and Uvalde shootings, and barely a week after President Biden signed into law the Bipartisan Safer Communities Act, [2] the first anti-gun violence legislation to come out of Congress in a generation. While we are grateful for any progress on gun policy reform, the new law takes just baby steps – it will do very little to curb our epidemic of gun violence and stop the parade of young men with assault rifles from becoming mass murderers.

Meanwhile, our overall epidemic of gun violence, of which high-profile mass shootings are only a small fraction, continues to rise. In 2020, the last year with complete data, gun deaths exceeded 45,000, representing a 14% increase from the year before, a 25% increase from five years earlier, and a 43% increase from a decade prior. [6]

Tell Congress to pass comprehensive gun safety reform now, including a ban on military-style semi-automatic assault weapons and high capacity magazines, and raising the age of gun purchases to 25.

We must demand true leadership from our elected representatives in order to rein in our rising gun violence epidemic. We need comprehensive reform, not just baby steps. It’s urgent – the lives of our children and families are increasingly at risk in our increasingly violent, armed society.

*Please share this with everyone you know who is concerned about gun violence, and ask them to sign too. The more of us who take action and speak out, the faster we can move gun safety policy forward and save lives.

We will never stop fighting for the safety of our families and communities.