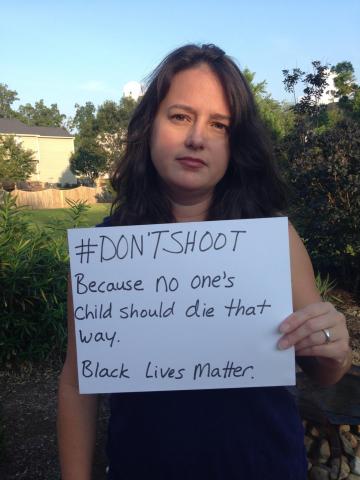 As a white woman who has lived almost my entire life in the South, conversations about race have never come easy to me.

I grew up in east Tennessee in a very homogeneous community. With the exception of two families, all my classmates were white like me and the schools taught very little, if anything, about segregation or the Civil Rights Movement. My only personal connection to Dr. King was that my father and his brothers were deployed to Memphis with the Tennessee National Guard when Dr. King was murdered. To this day, confederate flags fly from hillsides and pickup trucks in the area where I was raised.

So I’ve always struggled with knowing quite the right thing to say or do. But I knew early on that I wanted to be an ally and support the ongoing movements for justice. The question was how.

In college, I made my first close friends of color.  I fumbled my way through long and painful conversations about privilege.  I took classes, ultimately minoring in African studies, and workshops on dismantling racism. I spent several years working with communities of color around voting rights issues.  I made peace with that fact that I am a work in progress. I may not always get it right, but I can’t let discomfort keep me from trying.

Still, when it came time to teach my own children about race and privilege, I felt woefully unprepared. How could I begin to teach them about something so important when I still struggled myself?  When there were things like racial profiling and police brutality that I couldn’t understand, let alone explain?

So we started small. We bought children’s books about Dr. King and Ella Baker, Ruby Bridges and Rosa Parks, and read them not just during Black History Month, but all year long. We sought out diverse schools, sports leagues, and playgroups. And we decided early on to celebrate Martin Luther King Day as a family.

Raising our family in North Carolina, we are literally surrounded by Civil Rights history. From the founding of the Student Nonviolent Coordinating Committee at Shaw University in Raleigh to the earliest sit-ins in Durham and Greensboro, echoes of the Movement are all around us. From the time my oldest could sit up, we loaded him in his stroller and took him to join the crowds marching through Raleigh and to hear the speakers and choirs afterwards. When he was old enough to walk, we got him a tiny drum and he would march along with the bands.

But I couldn’t shake the nagging feeling that many of the celebrations were passing right over his head. Geared for adults, it was hard for him to grasp the true meaning of Martin Luther King Day. I longed for something that would speak to him and his friends in a way that they would understand. But I felt totally inadequate to provide it.

So again I started small. Organized a neighborhood service project and invited our neighbors and friends to join us. Had a small birthday party for Dr. King in my living room and read books about his life to the kids.

The next year a children’s store at a local mall invited me to host one there with MomsRising.org. I felt completely unqualified to do something like this on my own, so I reached out to friends of color for guidance and support. The first year we had story time and cake. A friend taught the children freedom songs. And 200 hundred children came.

And it kept growing. It seemed like lots of other families were looking for ways to teach their children about Dr. King, too. The next year, we invited Paula Young Shelton, Andrew Young’s daughter, to read her children’s book Child of the Civil Rights Movement about growing up with Uncle Martin, as she called him. And 500 came.

Almost a thousand joined us for the third year as we recreated the Royal Ice Cream Parlor, home to Durham’s first sit-in. We were privileged when Virginia Williams, one of the original Royal 7 protestors, came and shared her experience in civil disobedience with the children. Last year, Dr. Charmaine McKissick-Melton spoke to the children about what she experienced as the first child to integrate Durham’s public elementary schools. More than 1,600 people celebrated with us.

This year we will be celebrating Dr. King through the arts. The children will learn about the role Stevie Wonder’s Happy Birthday song played in building momentum for a federal Martin Luther King holiday, and express their own dreams through poetry, hear stories of the Civil Rights Movement, and celebrate through dance.

Every year I look out in awe at the sea of diverse families celebrating together, and I’m overcome with gratitude to the diverse group of mothers who worked for months to plan the event and to MomsRising for helping making it happen. It’s one of my favorite times of the year.

Talking about race with my children still isn’t easy. This year I’ve sat my kids down to talk about Michael Brown and Eric Garner, building on our heartbreakingly recent discussions of Trayvon Martin and Jordan Davis. I haven’t always had the right words, and they’ve asked hard questions. But we keep trying.

Ultimately, I want my children to know that they have a voice, and they should use it for justice. I want them to know their history and that they have a part to play in building a better future for all people. Martin Luther King, Jr. Day can’t be just one day a year. The hard work happens every day. And while our efforts may not always be perfect, showing up and trying is where it starts.