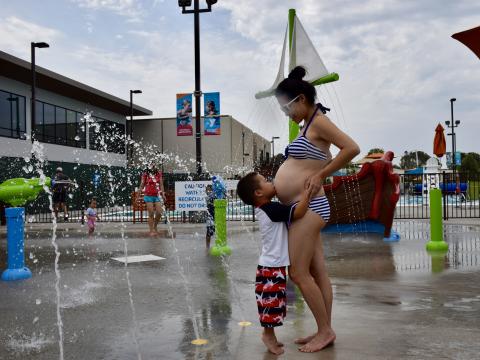 The author at 26 weeks pregnant.

Anything we can do, we can literally do it while growing a human inside of us?

To-wen Tseng
Share This
Add your voice to the comments
There has been a video circulating on the Internet. It shows Serena Williams playing in the Australian Open, Gal Gadot doing Wonder Woman reshoots, Alysia Montano racing at U.S. Championships, Beyoncé dancing on the stage, Nur Syryani Mohd Taibi shooting at Olympics, all during their pregnancy. The video concluded with “Anything you can do, we can literally do it while growing a human inside of us.”
Merely 26 weeks ago, I’d totally agree with the statement. I was a tough cookie during my first pregnancy. I stood under scorching sun for 11 hours to shoot the final landing of Space Shuttle Endeavour when I was two months pregnant. I covered smuggling stories from Mexico when I was eight months pregnant. I worked till the last day of my delivery, I even finished a short article while dilating in my delivery room. I traveled abroad several times through the entire pregnancy. Yes, everything I could do, I could literally do it while growing my first one inside of me.
Now that first one is four years old and I’m 26 weeks pregnant today. I thought I was going to be the tough cookie again. But this time I had pregnancy complications since the very beginning. I suffered from bad nausea, so bad that I have to move my computer to the restroom and do my works between vomiting sessions. I’ve been bleeding and had to cancel two business trips per doctor’s recommendation. I want to do everything I can do while growing my second one inside of me, but I’m trapped in this heavy, pregnant body.
I never realized how hard a pregnancy could be, and how essential supporting like paid family and medical leave could be. I’ve always been a supporter of paid family leave bills but I once thought I could live without them. Now I realized I can’t. Nobody can.
That’s why SB 5975, the paid family and medical leave bill the Washington State legislature passed last night was such a monumental victory, not only for working families and small business in Washington, but for the entire nation.
I’m not saying this because I'm having a rough pregnancy myself. I’m saying this because maternity complications could happen to any woman, any family. Our country needs parents to work, also needs parents to have babies. For this very reason, all parents deserve supports.
Once it becomes law, SB 5975 will allow workers in Washington to take 12 weeks of family leave and 12 weeks of medical leave, with a maximum cap of 16 weeks of paid leave per year. In addition, the legislation provides for two more weeks of paid leave for women who experience maternity complications, offering much-needed relief to new moms who suffer difficult pregnancies. The legislation covers all workers in the state, even self-employed individuals who can opt in the program. It’s a great start and can be a model for the nation.