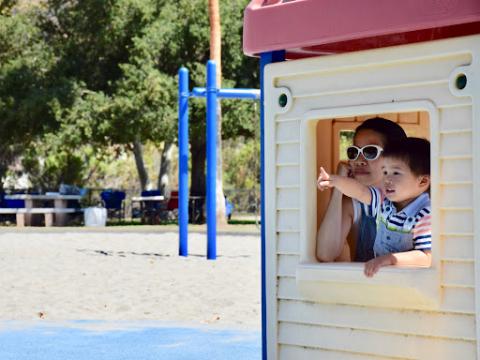 To-wen Tseng
Share This
Add your voice to the comments
One bright afternoon of this August in our neighborhood playground, an older child—probably 5 or 6 years old— threatened my 3-year-old son, saying “Trump will kick you out of here when he becomes President.”
That was the first time my son learned about the election. We didn't talk about it at home, considering he’s still young. I never thought he would learn about it this way in a playground. A shocking lesson for him.
And a shocking lesson for me. When it comes to unfriendly comments about immigrants and minority groups, many Asian American people, including me, often have an illusion of “safety”. Trump has accused Hispanic American of bringing crimes; he has called Muslims terrorists. But hey, we are Asian Americans. We are quiet and shy, we do our math and science, we don’t attract attention. Anyway, Trump did say that he “had a very good relationship with China” right before having that crying baby ejected at one of his rallies.
But what happened in the playground in that afternoon made it clear: when a hate movement and white nationalism becomes the mainstream, everyone can be a victim. Even a three-year-old boy can be threatened in his neighborhood playground.
For the past two months I’ve been praying for the victory of Hillary Clinton, so that I can tell my child “hate never wins”. The polls gave me some hope. But on the night of November 8, as the election results rolled in, I saw a very different America than the polls had predicted.
I put my child to bed that night right before the American crashed the Canadian immigration website. I tossed and turned, thinking about how I would explain this to him. Before I was ready, he woke up full of questions. He asked me if she had won. I told him no.
“But I want Hillary to be my president!”
“I know, baby.” I held him tight. He is too young to understand the candidates’ policies; all he knows is that if Donald Trump is in the white house, the bullies in the playground get a good line to yell at him.
Once again, I assured him, “We are American, this is our home, no one is going to kick us out of here, not even Trump.”
I’ve been repeating this to him for the past two months. Apparently it’s not good enough. He asked me if we’re moving to Asia to be with his grandparents. I told him no.
“But I don’t like Drump!” He mispronounced the president-elect's name as always.
“But you do like America, don’t you?”
He thought about it carefully and then nodded.
“That’s right, baby. As long as it doesn’t change, we’re here to stay.”
“But I’m upset.”
“That’s okay, baby. I’m upset, too. We all get upset sometimes. But we’ll be fine,” I told him. “If anybody ever tells you that Trump will kick you out of the country, just say, ‘No, I am American, this is my home, no one can kick me out of here.’”
He practiced the sentence a couple of times and seemed to be comforted.
There is so much more that I wanted to tell him. I wanted to tell him it’s not the end of the world. I wanted to tell him that human beings are resilient. I wanted to tell him that we can do better than running away. I just don’t know how to make a 3-year-old understand all of these things.
In spite of all the frustrations at this moment, I still believe in America. Sure, the election had modeled the exact opposite of the values I believe in and hope to instill in my children. The xenophobia that came directly out of Trump’s campaign has harmed my family. But I see that most of my fellow American don’t believe in the racism and sexism either. Clinton won the popular vote. Which means the majority of American believe that women should be paid the same as men, they care about climate change, they don’t want the implementation of aggressive surveillance programs that target certain ethnic groups.
This is the moment not to sit down with frustration, but to stand up against discrimination, bigotry and hate. And there is so much we can do. We can volunteer. We can donate. There is Showing Up For Racial Justice that combats racism, Planned Parenthood that gives women the opportunities for proper healthcare, ACLU that upholds the individual rights guaranteed by the US Constitution. And we have MomsRising here. Most of all, as parents, we can continue teaching our children the values we believe in: honesty, race and gender equality, love. The election changed none of that.
Just like President Obama said on election day, “The sun will rise in the morning.”