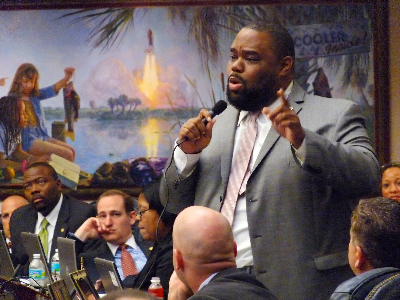 This post, authored by Florida State Senator Dwight Bullard, originally appeared on TalkPoverty.org. State Senator Dwight Bullard urges Americans to continue the fight for policies that support working families.TalkPoverty.org is dedicated to demonstrating that we know how to dramatically reduce poverty; we just need to build the political will. Make sure to like TalkPoverty on Facebook and follow us on Twitter!

Editor’s Note: On the weekend following the election, the Half in Ten campaign co-hosted a poverty summit in Miami, Florida with Catalyst Miami, a non-profit organization dedicated to building a community and economy that benefit all of the state’s residents.  More than 200 political and civic leaders, advocates, and community residents discussed a range of issues and strategies to address them, including: Medicaid expansion, immigration reform, criminal justice, housing and transportation, wages and opportunity, education, and media coverage of poverty.

I lead the Florida Democratic Party so on Wednesday I was pretty spent emotionally and physically.  But this anti-poverty summit we had just around the corner made me psyched.  It served as a reminder: “Time to get up off your butt.  We got work to do.”

There is a lot of money, and a lot of egos, trying to deafen this message.  And we need to stop waiting on ‘go betweens’ to deliver our message for us.

You all are the halls of power.  You don’t need people to be your voice—you are the voice.  You need to be active—at city hall, at the state capitol, and in Washington, DC.

People will see in you a chance to change the world we live in.  They will see the ability to be their own Gandhi, their own Dr. King, their own catalyst for change.

There’s only one way to change income inequality in this country: organize, mobilize, agitate and disrupt the current flow of B.S. from Tallahassee to D.C.

Your job is to hold the policymakers fully accountable.  And that doesn’t begin at the ballot box.  It needs to be a constant barrage that says, ‘If you are not the change agent I need, you are dismissed.’

And we need to believe in the power of the vote.  Scotland recently voted on whether to separate from Great Britain—89 percent of the voting population participated.

Denmark—on a regular basis—has no less than 86 percent voter participation.  That’s why they have a $22 an hour minimum wage.  Unionized labor.  Universal healthcare.  Paid college tuition.  How?  It begins and ends with 86 percent participation every election.

When you average about 40 percent participation like we do in the United States—you get what you deserve.

So organize, mobilize, agitate—be the change agent you need to be.

Dwight Bullard is the State Senator representing the 39th District in Florida.  He is also a teacher at Coral Reef Senior High School in Miami.  You can follow him on Twitter @DwightBullard.