A Stronger Nation for All: Why I Fight for Comprehensive Immigration Reform in Congress 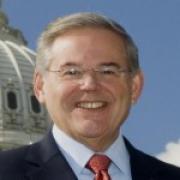 Robert Menendez
Share This
Add your voice to the comments

The 2012 elections marked a pivotal point in our nation’s history: Latino voters represented a record 10 percent of the electorate and voted overwhelmingly in support of President Obama, as did a vast majority of Asian and African American voters. The voices of Hispanic Americans and other racial and ethnic minorities were heard loud and clear as we collectively ushered in a President who supports comprehensive immigration reform and rejected a candidate who promoted “self-deportation” and promised to veto the DREAM Act.

The 2012 Presidential election was, in many ways, a mandate to enact immigration reform that provides a roadmap to citizenship for the 11 million undocumented immigrants present in the U.S. I have said on numerous occasions that I consider immigration reform to be the civil rights issue of our time, and I believe now is the time to act on it.

Less than two weeks ago, I stood with my colleagues from the Congressional Hispanic Caucus and reiterated my commitment to advancing common-sense, comprehensive immigration reform that serves America’s interests, promotes fairness and the rule of law which is essential to the strongest democracy in the world, and contributes effectively and meaningfully to our economic recovery and well-being. I believe that immigration reform must include several important elements, many of which tie closely to MomsRising’s current Blog Carnival theme of Protecting Family Unity, Strengthening Communities, and Ensuring a Thriving Economy with Contributions of Immigrants:

Advancing comprehensive immigration reform (CIR) starts with embracing our shared American values and recognizing the immense contributions of immigrants to our nation’s culture, economy, and prosperity. Reform reaches well beyond the interests of immigrant communities that turned out at the polls on Election Day—it is also in our economic interest. Studies have shown that CIR would increase our federal revenue by billions of dollars each year and inject an estimated $1.5 trillion to our nation’s GDP over a decade, demonstrating that power of reform to aid our nation’s recovery.

As the son of Cuban immigrants and the only Latino Senate Democrat, I will continue to work tirelessly to ensure that the voices of all Americans are heard in Washington and that the issues of greatest importance to our communities are prioritized and addressed. We must work together to find common ground and come to an agreement that will bring millions of Americans out of the shadows so that they can contribute fully to the recovery, and so that we can all – as one nation – benefit from it.