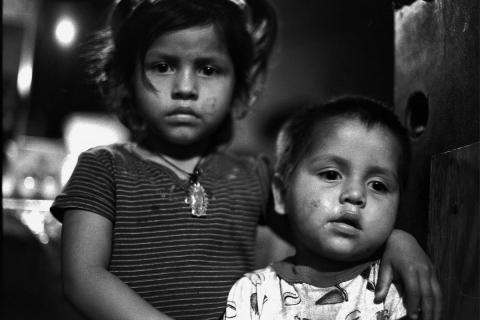 A New Moral and Human Low

It has come to this: tear-gassing toddlers. Heartbreaking images of the American government’s attacks on asylum-seekers at the border have emerged over the past several days. In one photo a barefoot child in a diaper sobs, clutching her mother with one hand and a plastic ball—a lone prized possession—with the other. Her mother, who was pictured in a second photo desperately trying to flee from the tear gas with her two young children, told an interviewer: “I felt sad, I was scared. I wanted to cry. That’s when I grabbed my daughters and ran. I thought my kids were going to die with me because of the gas we inhaled.”

When I saw those pictures I was instantly transported back to Birmingham, Alabama in 1963, to segregationist police chief Bull Connor’s use of vicious police dogs and powerful firehoses to attack Black children marching for their freedom. I often say that I do this work because I don’t want my grandchildren fighting the same fights we did back then. And yet here we find ourselves, with my grandchildren and young people across the country witnessing our government attacking small children for daring to dream of a better life.

President Trump and Administration officials act as if gassing babies at the border is business as usual, just as they did when the public cried out about our government ripping children from the arms of their parents and putting them in indefinite detention in cages and tent cities. But nothing about this is “usual,” and we must not allow ourselves to become inured to cruelty and injustice. This is not who we should be as a nation. We must continue to come together, speak out at every turn and take a stand against the outrageous atrocities being committed by President Trump under the guise of keeping Americans “safe.”

The Children’s Defense Fund is working at the heart of this issue. When too few were paying attention to the incarceration of asylum-seeking women and children in harmful for-profit detention centers, our Texas office fought to stop these detention centers from receiving state-issued child care licenses that would have allowed more children to be incarcerated there for even longer periods of time. CDF-Texas was one of the first organizations to report the shameful practice of separating children and babies from their parents on the border. Next weekend, our Texas office will hold a vigil to protest the most recent attacks on asylum seekers. A Texas resident who recently attended a CDF-led rally said. “I am happy so many are committed to peaceful protest. I know we will continue to rally, write our representatives and speak out until all families are reunited, people seeking asylum are not turned away at our borders, people detained are given due process & immigrant is not a pejorative…This country was built by immigrants. Our diversity is what makes us strong. Do not give up.”

We must never ever give up, and we must keep fighting these evil acts. This administration’s attacks aren’t limited to small children and families outside our borders; they are taking action to harm immigrant families already in America, too. The administration has proposed changes to the “public charge” rule that have the potential to plunge millions of children and their immigrant families into poverty, hunger, and homelessness. When parents and other adults apply for lawful permanent residency or entry into the United States immigration officials currently consider whether that person is, or is likely to become, reliant on the government, or a “public charge.” The longstanding federal policy is to consider whether an individual will rely on the government by examining whether he or she receives cash assistance or will need long-term care benefits. But the change proposed by the Trump administration would allow immigration officials to deny green cards and visas to a much broader group of immigrants who use public benefits including non-emergency Medicaid, the Supplemental Nutrition Assistance Program (SNAP), housing assistance, and the Medicare Part D low-income subsidy.

With this change, the Department threatens to shut down legal paths to citizenship for families that use these safety net programs—including those to which they are legally entitled—to feed their children, put a roof over their heads and keep them healthy. Even people who haven’t used these programs in the past can be denied a green card or visa if there is a suspected risk they are “likely” to use them in the future. Nearly 1 in 4 children in America has at least one immigrant parent, and nearly 90 percent of those children are citizens. By making legal use of safety net programs one of several new heavily weighted factors in determining whether an individual qualifies as a public charge, millions of immigrants will be subject to this expanded definition of public charge, which is likely to cause both immigrants and their children to forego crucial food assistance, health coverage, and safe housing for fear of the consequences.

But there is a light in all this darkness: the government is required by law to review public comments on these proposed changes and there is still time to make your voice heard. Comments must be submitted by Monday, December 10. To take a stand against this attack on immigrant families and children go to https://protectingimmigrantfamilies.org/#take-action and submit a comment opposing the proposed change to the “public charge” rule. This is one more way to stand up and say this is not who we are or want to be as Americans.

Our inhumane treatment of families and children who come to America seeking a better life is degrading and diminishing us as a nation. It is not protecting us or making us great. Let us show immigrant children and families both inside and outside our borders who we really are by standing up for their safety, their lives and their right to pursue a better future.