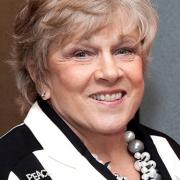 I had a father I worshiped. I think of him on Father’s Day and every day. One thing he did not like is this special day for special treats. Unlike for Mother’s Day where he honored the traditions of breakfast in bed, flowers, candy, perfume, I’ll-do-the-laundry (whoops, that’s my special day dream), etc., my dad would have loved his day to simply read the newspapers and watch a ball game or three.

Did you know? Mother’s Day origins were a century ago in the passionate desire to remove men from the fields of war, literally. Fathers’ Day actually made our calendars only in the 1970s as a result of decades of commercial enterprise around Mother’s Day pushing lobbying for another spending spree for dads.

The mother of Mother’s Day, Julia Ward Howe had lamented, “Why do not the mothers of mankind interfere in these (war) matters, to prevent the waste of that human life of which they alone bear and know the cost?”

So what if that day came out of a passionate longing for peace, don’t fret, it’s just fine to honor moms and dads. Why not? We have a National Pickle Day (this year, November 14th if you need to prepare). And for oh-so-many reasons mothers and fathers deserve special attention if only to focus us in from regular, frenetic lives.

At this time of my life, working as I do every day to rid the world of unneeded, wastefully expensive, big weapons used for wars…I think of my father and his own gun. And his attitude toward weapons violence. He was in the FBI, so his gun was legitimate, and he made quite certain we respected it and what it could do. Gun in the drawer, bullets in a different drawer. Do not touch or you are grounded.

He joined the FBI during WWII, and the only thing he ever later revealed about that war was that he was relieved we were never crushed by a nuclear bomb, as was Japan.  He was a man of few words, and all were salient. I got the message.
He also said: Guns were for law-abiding citizens. We all feared the day when he might be the victim of an unlawful assailant. But we never worried about ourselves being victims of gun violence. I tremble to think of what he would say today about today’s gun flood and the many young people whose lives are shattered by either end of a gun.

Hence my thoughts on this Father’s Day: My wish is that fathers and mothers, who share a need for a gun legitimately, and with a healthy mental state, gather and demand gun safety.

In 2000, one million women (and men) assembled on the Washington Mall saying “enough is enough.”  Fourteen years later, here we are when a grieving father whose young son was shot down by another young man in the UCSB shootings in May had to cry ,“Not one more.”   Richard Martinez, the father, launched a flurry of post cards, emails, tweets, and Facebook posts shouting “not one more.”  And still there are more.

My Father’s Day dream is that those of us, who marched in 2000, send post cards in 2014, are joined by NRA members and others who know that gun safety trumps everything. If they demand restrictions, it could happen.  If they, like my father, protect their guns from misuse, and weep when children are shot accidently, weep when the mentally deranged shoot down innocents, weep when a gun suicide destroys a family… if they take action and demand gun safety laws and restrictions, that would be a father’s day and mother’s day blessing for all time.
Staggering statistics will make you reel, but one is enough:  every day in the U.S., an average of 87 people die from gun violence — 54 from suicide, 31 from intentional homicide, and 2 from accidents. Okay, one more statistic: We have almost as many civilian firearms as people in the U.S.

I gained so much from my father and mother.  An appreciation for family, politics, ethics, a love of books, and a crazy affinity for beagles. This year, I honor my father with an appeal to all fathers and those who had fathers, well, everyone, to heed this one final plea from the father of the shooter, Peter Rodger in California: “We are crying out in pain for the victims and their families. It breaks our hearts on a level that we didn’t think was possible. It is now our responsibility to do everything we can to help avoid this happening to any other family."

Both grieving fathers met in private. If you can imagine their pain, then fight for gun safety for them on this Father’s Day.  It will help us all celebrate families everywhere.