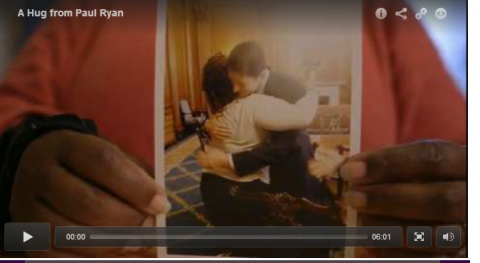 A Hug from Paul Ryan

Hugs are nice. But hunger advocates such as Tianna Gaines-Turner want policy-makers and members of Congress to know that as nice as a hug is, it does not put food on the table, workers in good-paying jobs, or families in affordable, secure housing.

On Monday, Gaines-Turner, who lives in Philadelphia and works part-time as a child-care provider, came to Washington, D.C. to participate in a screening of A Hug from Paul Ryan, a Sundance film short documentary that followed her story. The highlight: In 2013, Rep. Barbara Lee (D-CA) wanted Gaines-Turner to appear before Speaker Ryan’s committee to share her story about her family’s struggle to survive on SNAP benefits.

Ryan did not allow her to testify in person; instead, she was invited to submit written testimony. And during a break in House activity, Lee pulled Ryan off the House floor to introduce her to Gaines-Turner; this led to the infamous hug from Ryan. One year later, Gaines-Turner actually was allowed to testify in person; she became the only person receiving public assistance to appear at the House Budget Committee’s 2014 “war on poverty” hearing.

Attending Monday’s screening were Lee, Rep. Rosa DeLauro (D-CT) and Rep. Steny Hoyer (D-MD), as well as hunger advocates. They were mindful of the fact that some in Congress, once again, have proposed serious cuts to SNAP, this time in the neighborhood of $23 billion over ten years.

Also looming on the horizon is a soon-to-be-released report from a House GOP task force on poverty laying out recommendations to address poverty in the U.S. Human needs advocates fear the task force’s recommendations, if implemented, would actually exacerbate poverty in our country – for example, by making it more difficult for working Americans like Gaines-Turner to access benefits and by allowing states to attach onerous conditions – such as drug testing – before benefits may be received.

Indeed. A look at the task force’s composition reveals it is made up of five white males, all Republican, all committee chairs in the House: Reps. Mike Conaway, Jeb Hensarling and Kevin Brady, all of Texas; Tom Price of Georgia and John Kline of Minnesota.

Regardless of what the GOP task force recommends, its recommendations should be viewed in the context of GOP budget proposals. Less than a month after the task force on poverty was launched earlier this year, the GOP proposed a budget that would worsen poverty in the U.S. and make it more difficult for Americans to join the middle class. Among the budget proposals: cuts to Medicaid and the Children’s Health Insurance Program (CHIP), repealing the patient protections in the Affordable Care Act, ending the Medicare guarantee, block grants, and, of course, massive cuts to SNAP.

Neither the poverty task force nor the GOP budget say anything about hugs.

“No man nor woman nor child can live on hugs along,” Rep. Hoyer said Monday. “Hugs are nice. But this debate we are having in America today is about whether rhetoric will substitute for help.”