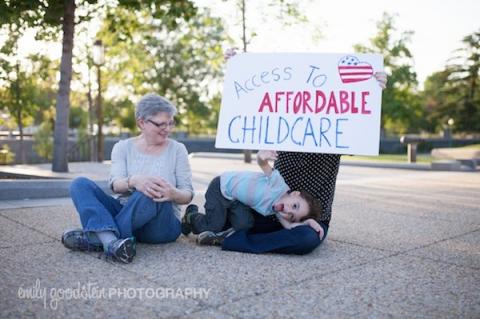 We did it!  Because you raised your voice, made calls, signed petitions, sent letters, shared your story, went to Town Halls, took action — along with hundreds of thousands of other people across the nation and across multiple organizations — you stopped a horrible healthcare bill in it’s tracks. Thank you!

We won that battle, but the fight is still on to make sure everyone in our nation has a chance to thrive. In good news: We have proof that your voice is powerful. And MomsRising is at your service finding the very best ways, and most strategic avenues, for you to have an impact.

So below you’ll find the Top #5Actions of the week. You can do all five of the actions on one day, or spread them out across the week, your choice. The important thing is not WHEN you do them, but IF you do them. And if you do them, your actions will add up with others, and you're sure to have an impact.

1. WE PERSISTED & WE WON! Share The Joy! Celebrate our big win on health care via social media (Facebook & Twitter) to show people that their voice is powerful — and to inspire people to #KeepMarching!

BACKGROUND: We persisted—and it worked! Last week, we won a major health care battle. The U.S. House had to pull the incredibly destructive American Health Care Act (AHCA) from the floor because they didn’t have the votes to pass it. VICTORY! If passed, this bill would have cut 24 million people off health care. But we persisted, spoke out, and won! Over the last 3 months we called, wrote letters, showed up at town hall meetings, and shared our health care stories. NOW WE CELEBRATE! Celebrating together is essential not only because it’s fun, but also because it shows people that when you take action, you can have an impact so it inspires people to #KeepMarching. Share our celebration image on Facebook and Twitter!

BACKGROUND: Appointing Neil Gorsuch to the U.S. Supreme Court would move the Court in a dangerous direction, one that threatens the rights of women, LGBTQ+ people, people of color and workers. Judge Gorsuch joined the original Hobby Lobby decision that ruled corporations that allowed bosses to deny women birth control coverage. Reports that Gorsuch told his students that companies should ask women about their pregnancy plans during job interviews, as well as and  his claims that women plan to manipulate their employers by taking maternity leave, and then quitting to stay home with their children, prove that he will not be the fair jurist that America’s families and economy need. His appointment would codify the worst of the Trump Administration into our nation’s laws for a lifetime - something our country simply cannot afford. And with the White House currently under investigation, now is not the time to consider appointing a new U.S. Supreme Court Justice. Help stop Gorsuch's confirmation and call now.

BACKGROUND: U.S. Senator John Cornyn has introduced the Concealed Carry Reciprocity Act of 2017 in the U.S. Senate that would force states to recognize concealed-carry permits from all over the country, regardless of how lax the permitting standards are in other states. Should it become the law of the land, individual states would no longer be able to control who is authorized to carry a concealed gun within its borders. Furthermore, police would not even be able to quickly find out if out-of-state permits are valid, putting law enforcement and the public at higher risk of harm. Mandated national conceal-carry would gut common sense gun safety laws that parents worked hard to pass in states across our nation. Americans are already about 20 times more likely to be killed by a gun than someone from another developed country. Now is not the time to weaken common sense safety standards or states rights!

4. Want To Connect With MomsRising Members Near You By Joining A #KeepMarching Circle In Your Community?

BACKGROUND: From taking action, to sharing resources, to staying on top of the issues, there’s a lot to do — and it’s often the most fun and easiest to do it with a group of people. That's why MomsRising has launched #KeepMarching, a project to support moms and family members who are taking the lead and organizing in their communities, and to create on-the-ground connections among our members to join together to make a difference. When you sign up to join a #KeepMarching Circle, you give us permission to share your contact information with other MomsRising members near you so they can be in touch.

5. What’s Your Experience With Childcare & Early Learning? To build momentum nationally for early learning, we need families (like yours!) to share their experiences with early learning programs like childcare to show our leaders that early education is a priority for their constituents. Have you ever struggled to pay for high-quality childcare? Do you have a success story? Are you a childcare provider? Do tell! And we’ll share with leaders to help get the best policy possible moving forward.

BACKGROUND: The good, the bad, the complicated — we want to hear it! Personal experiences are powerful and can make a HUGE difference in helping elected leaders understand why supporting access to early learning programs like childcare is so important. Click the link above to share your experience with childcare to help educate leaders about what’s really going on in our nation so they can write the best policy possible for our families and economy.

Like what we're doing? Donate: We're a bootstrap, low overhead, mom run organization. Your donations make the work of MomsRising.org possible--and we deeply appreciate your support. Every little bit counts. Donate today on our secure website.

Want info from MomsRising.org in Spanish? Sign up to receive emails from our Spanish-language community, MamásConPoder.org!

What should MomsRising tackle next? Tell us what's on your mind.