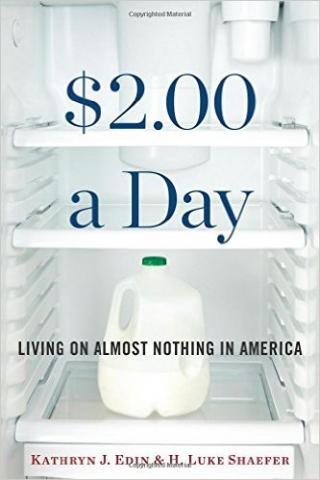 $2 a Day: The Cost of a Fractured Community

Later today, it will be my honor to moderate a webinar co-hosted by MomsRising to discuss an important book, $2 a Day: Living on Almost Nothing in America. The authors, Kathryn Edin and Luke Shaefer, will talk about their powerful book, which portrays the lives of a number of families who have struggled with almost no cash. They will be joined with three other experts: Tamara and Sharon, who have been that deeply poor, and Kate Scully, who works for the Center for Hunger Free Communities.

Everyone should read this book, and listen to the webinar! (If you’re not able to listen/view at 4:00 p.m. ET on December 22, register anyway, and we’ll send you the recording afterwards – and it will be on the Coalition on Human Needs’ website, at www.chn.org.) Anticipating the conversation, I’ve been thinking about community. How can we do better in making sure that everyone is part of a community, contributing to it and drawing from it throughout life? There are people across the political spectrum who care about poverty. They have different views about what strengthens a community, but they all seem to believe it is an essential component in providing the opportunities and security people need to lead a comfortable life.

Part of community is talking with each other – and I hope you will use CHN's blog, Voices for Human Needs, to engage in that form of community-building. Write a comment there – or wait to view the webinar and then make a comment. If you’ve been poor, we will be indebted to you if you can share some of your experience. Whether or not you’ve lived through/in poverty, your perspective on what can help is most welcome – please join in!

$2 a Day shows what life is like for people who are forced to get by on almost no cash. In 2011, the book tells us, there were 1.5 million households including 3 million children with cash incomes of no more than $2 per person per day. Tellingly, that number had doubled since 1996. In that year, the welfare law passed, which made cash assistance far less available for poor families with children. That law was supposed to encourage work, and at first, there was a big increase in the number of single mothers entering the labor force. As it happened, the new law coincided with some other big developments: a booming economy and a significant increase in the Earned Income Tax Credit. There were jobs to be had, there was a new cash incentive that helped to boost low pay, and there was an expansion of subsidized child care. Although the proponents of the welfare law insist that its work requirements and time limits were the driving force for the increased work among single moms, social scientists have attributed much of the increase to the economy and to the incentives and supports provided.

But when the economy contracted, where were the community supports for the people who lost their jobs? Many people fell pretty far without getting much help. If you’re not working, you can’t benefit from working family tax credits. Despite years of work, once unemployed, there was no way to pay the rent. Sharon, one of the webinar’s experts, lost a job with decent pay, and in the aftermath of the Great Recession, couldn’t find another one. When she applied for jobs at lower levels than she had previously worked, they wouldn’t hire her because they thought she’d just leave as soon as something better came along. One prospective employer rescinded a job offer when they saw how much she had made at her previous job. She lived out of her car for a time, and then had to struggle each night to get a shelter bed. The experience left her pretty sick and unable to work.

Sharon eventually found her way to community supports that got her out of homelessness. The private organization Rosie’s Place, which does not take government money, was and continues to be a tremendous help to Sharon. But an effective community needs public and private resources. Sharon now has a publicly subsidized studio apartment, and publicly funded health insurance, and SSI. She contributes her talents and work to the community that Rosie’s Place provides, and looks forward to her health improving enough so she can work for pay.

If our communities were stronger, utilizing public and private resources, perhaps Sharon could have avoided the bout of homelessness that compromised her health. What if there were more public jobs to keep people in the labor force when the private sector was tanking? What if there was more low-cost housing, with subsidies to prevent unemployed people from becoming homeless? What if there were more social workers and employment specialists who could offer guidance in tough times? What if cash aid were more readily available to prevent destitution?

Some supports were expanded during the recession. SNAP/food stamps expanded and millions more people got this essential help. Unemployment Insurance expanded for a time, but low-wage workers could not always qualify for UI. Private emergency food and shelter agencies struggled to meet the growing need, and got government funds to support their work. But some of that aid was cut back in the years after the official end of the recession, even though it remained very hard for low-wage workers to earn enough to pay for necessities.

The stories in $2 a Day, confirmed by the experiences of Sharon and Tamara, show the utter lack of economic security for the poorest members of our fractured community. You can work reliably for months or years, be unable to come in because of car trouble or illness, and lose your job. Your employer can demand you to be on call for work that may not materialize, leaving you with too few hours of paid work to make ends meet. The lack of a regular shift makes getting reliable child care almost impossible. And if a job is lost, it doesn’t take long for security and safety to unravel.

Thinking about it, the lack of economic security is what happens when community fails. But looked at the other way, a strong community makes use of public and private resources to help people remain secure even in the face of reverses often not in their control. In a recession, any of us may lose a job, but none of us should go hungry or homeless as a result. Any of us may be unable to work because of health or other personal crises, but we should be able to count on help to reduce the chance that those crises undo us. Right now, too many are not sharing in the supports and opportunities that a real community should provide.