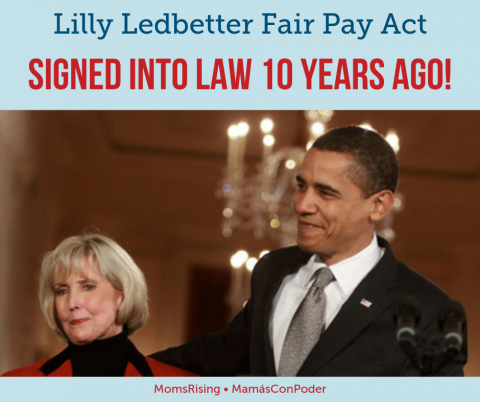 “Ten years after President Obama signed the Lilly Ledbetter Fair Pay Act into law, Congress has still failed to take the next meaningful steps to end pay discrimination. As a result, harmful wage gaps persist: Today the wage gap is worst for moms and women of color, with moms making 69 cents for every dollar paid to dads and women of color making as little as 49 cents on the dollar. Overall, women are paid just 80 cents for every dollar paid to men. These gaps are punitive and unjustifiable. They hurt women, families and our economy, and they must end.

“The Lilly Ledbetter Fair Pay Act was an important victory that boosted women’s ability to fight back against unfair wages. It was named after Lilly Ledbetter, who was then a tire factory worker in Alabama who was paid significantly less than her male coworkers for nearly two decades, before a note left anonymously in her locker revealed the disparity. The bill’s eventual passage, following legal action that went all the way to the U.S. Supreme Court, demonstrated how women can create change when we speak out against injustice.

“This legislation was an essential step, but it only remedied a harmful, misguided U.S. Supreme Court ruling in Ledbetter’s case; it did not create the protections and programs we need to prevent wage discrimination from happening in the first place. Ten years later, we still need policies that are effective in preventing and combating wage inequality, including stronger remedies for wage discrimination, paid family and medical leave, earned sick days, and affordable child care.

“We look forward to the introduction of the Paycheck Fairness Act this week and expect the most diverse Congress in history to make passing it a top priority. America’s moms can’t wait any longer.

“No woman should be shortchanged on her paycheck because of her gender or race, or because she is a mom. We will continue to raise our voices until these disgraceful wage gaps are closed, once and for all.”