“We Just Came for a Birthday Party” 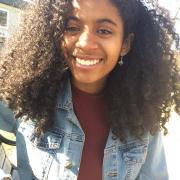 We just came for a birthday party,” pleaded one Black male teen that had been forced to the floor.

I watched the video from Craig Ranch North Community Pool in McKinney, Texas four times. Honestly, when I first saw the video I thought it was a joke. With the overly excited officer doing a jump and roll behind a tree only to run back and forth trying to gather all the Black boys he could find, I thought the video was a parody. Until I heard the boys' pleas and watched an officer force the face of a Black teenage girl into the grass only to rest his knee in her back - as if she wasn’t obviously unarmed and he wasn’t two times her size.

Still I wasn’t surprised as I went on to watch the video of the 19 year-old African American Host, Tatiana Rhodes, explain what happened from her standpoint. She stated that she and her friends were bombarded with racial slurs and attacked by older white women at the pool. However, when the police were called the Black teens were the ones who were treated like the criminals, after all, what does their side of the story have to do with anything?

For two hours I sat and tried to write a tear-provoking response to it all and then I realized I shouldn’t have to.

If individuals do not understand the problems surrounding Black and Brown bodies and the criminal justice system it is only because they don’t want to. The people who claim we live in a “post-racial society” are actively ignoring the race issues that are too deeply ingrained in American history and culture to blow over without proper reform and attention.

At 19 years old, I have conversations about police brutality everyday, literally everyday. Not because I want to but because police abuse is a real and an everyday occurrence for people in Black and Brown communities. I’ve had to listen to stories of loved ones telling me about that time “ a cop picked me up while I was taking out the trash just to drop me off 30 minutes away when he knew I didn’t have any money or a metrocard on me” or “The cop called my mother a B***, she died when I was 4 I couldn’t hold it together.” I have watched videos of policemen murdering unarmed men (Walter Scott) and slamming pregnant women (Charlena Michelle Cooks) without blinking, without shock because it happens too often for it to be surprising.

Now, in conversations with friends about the future I often remain quiet while discussing children. Ashamed, that my biggest fear is given birth to a beautiful Brown baby who will be forced to grow up in a society who criminalizes them first and asks questions later.

How do we work to provoke empathy, outrage, but most of all change? Would the adult male figures in this video be so calm and supportive of the police officers if it had been their children lying on the grass or forced to sit on the curb after they had been threatened or disrespected? No one should be numb to this type of mistreatment because when one person's freedom and humanity is threatened all of our freedom and humanity is threatened.